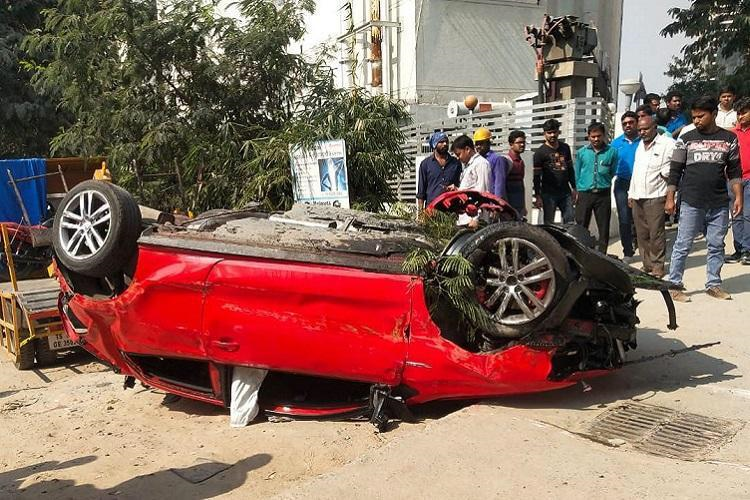 According to a report, the dramatic accident killed one pedestrian and injured six other people.

In the CCTV footage, one can see the shadow of the car, in the air, appearing on the road before it smashes into the road.

Another video angle of the accident shows the car hitting the ground exactly where a crowd stood near the place where the autorickshaws were parked.

The car flipped after hitting the ground and was immensely damaged.

The car, after losing control, fell from the flyover located at Biodiversity Junction, Raidurgam in Hyderabad.

The driver of the vehicle in the accident miraculously escaped death.

#WATCH A car after losing control falls from flyover located at Biodiversity Junction, Raidurgam in Hyderabad; one pedestrian has lost her life in the incident, car driver and 2 others receive injuries; Case registered pic.twitter.com/Tjl8yPaC8g

Such was the impact of the collision that the tree was uprooted and the car dragged on for several yards, damaging few vehicles parked by the roadside. The images show several people, who had narrow escape, running in panic while some passers-by stopping to help the injured.

The injured were admitted a nearby private hospital, where the car driver’s condition is stated to be critical.

The deceased woman has been identified as Satyamma, a resident of Manikonda area. Greater Hyderabad Mayor Bonthu Rammohan announced an ex-gratia of Rs 5 lakh for her family.

Cyberabad Police Commissioner V. C. Sajjanar told reporters at the accident site as stated by Gulf News, that the car was being driven at a speed of 99-104 km and the person driving the car lost control of the vehicle at the curve.

According to reports, this was the second disaster on the flyover, which was inaugurated earlier this month, connecting the busy IT corridors of Gachibowli and Hitec City.

Road users have complained that the sharp curve on the flyover is leading to accidents. The Police Commissioner said they would take necessary safety measures but appealed to people to drive cautiously and not to exceed the speed limit.

The media team at Euro Weekly News has found another recording of the incident, taken from the flyover where the car can be seen to crash the barrier at high speed (double the permitted) flip and plunge over the side.