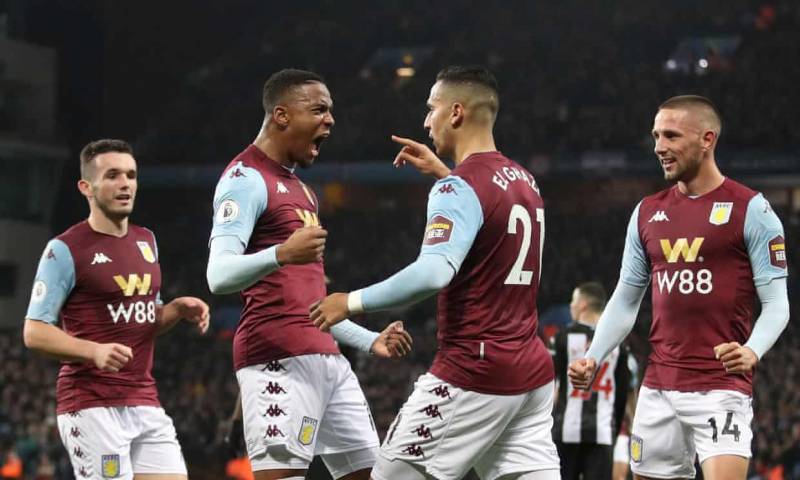 Newcastle got the game started at Villa Park, and Saint-Maximin’s early cross bounced harmlessly through to Heaton.

The game saw a lively start, Newcastle tried to play the ball out of defence, but the home team didn’t give them any time or space, and after trying on the left, trying through Dubravka and trying on the right, they eventually gave it away, and Douglas Luiz had a shot that deflected wide.

On the 13 minute mark Villa had their first real chance. From a throw-in they attacked. Grealish dummied gave Targett space on the left to consider his options, and he fired in a delicious low cross that El Ghazi looked destined to turn in, but it didn’t quite turn in.

32 minutes and we saw the first goal and it went to the home side. Hourihane tapped a free kick to Grealish, who teed him up. An extra couple of feet allowed Hourihane to curl the ball around the static wall and just inside the post and Villa Park erupted as Villa took the lead.

3 minutes later Grealish got near the Newcastle penalty area again, and he was brought down again. Fernandez was booked. Nasty challenge and clearly the Toon were under instruction to target the wizard Grealish.

Villa from the free kick scored again-One free-kick goal for Hourihane, and one free-kick assist! Dummett just stopped running as it curled into the six-yard box. Behind him, El Ghazi didn’t had put the Villa 2-0 up.

Newcastle had got this all wrong tactically. The 10 men behind the ball approach was clearly not working, the hack Grealish whenever he’s in the vicinity of the area tactic was just a few extra hundreds and thousands of idiocy atop an already silly cake.

Villa deservedly lead at half-time. There had not been very many actual goalscoring chances other than the actual goals, but it’s been a half of two halves. In the first, Newcastle lacked ambition. In the second, they lacked quality.

Second half Newcastle threw on big Andy Carroll and changed tactics – lumping the ball up to the big Geordie forward but it was to no avail, both sides had chances second half but in all honesty with their 2-0 lead Villa never looked like losing this and saw the game out with a score less second half.

A more than decent game for the neutral, even if both of the goals came from set pieces and there weren’t a lot of clear opportunities from open play.  Villa have an excellent midfield and it’s a pleasure to see the ball go through them; Newcastle have Saint-Maximin, who’s fun in his way and could at any moment start to actually contribute to actual goals, and a defence shoddy enough to make something interesting likely at some point.