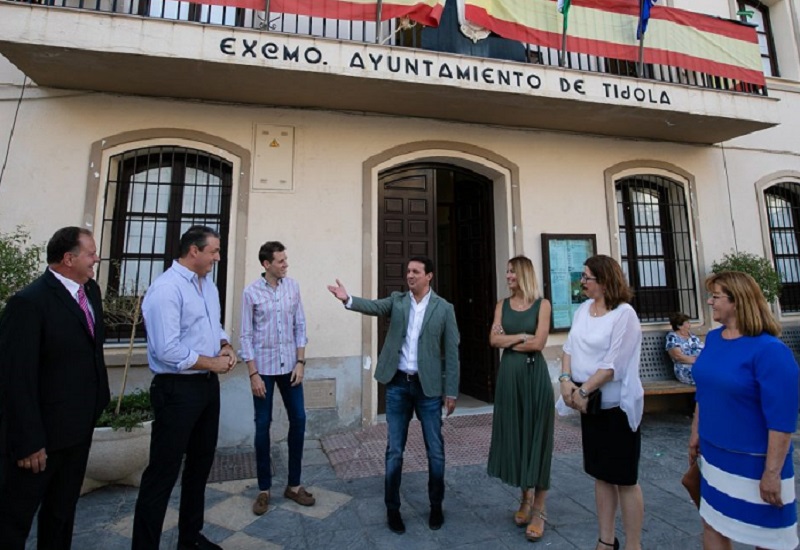 OBJECTIVE: The provincial government said the aim is to put an end to water cuts and leaks and improve the network efficiency. CREDIT: Diputacion de Almeria website

TIJOLA’S water supply network is set to undergo a €450,000 overhaul.
The Diputacion de Almeria announced the administrative processes for carrying out the package of investment in the municipality have been finalised, and provincial Public Works deputy Oscar Liria said the contract for the Tijola Hydraulic Infrastructure Renewal Plan has now been awarded.
The Tijola project is part of a more than €8 million provincial government outlay on water infrastructure managed by the Galasa public company in the Levante and Almanzora regions; measures in Tijola and Arboleas bring the series of investments under the plan to a close.
In Tijola the works will include the replacement of more than 1.5 kilometres of pipes and 233 domestic connections. The town streets which will benefit from the updates are Sevilla, Madrid, Cadiz, Granada, Filabres, Virgen del Carmen, Alcalde Perez Arriaga, Juan de Austria, Ramon y Cajal, De La Cruz y Malaga.
The Diputacion said the aim of the investment is to remove obsolete infrastructure, prevent water cuts and make the network more efficient and effective.
“The Diputacion committed to renewing the hydraulic infrastructure in all the municipalities on the Galasa network, and now that is a reality, reducing leaks and putting a stop to breakdowns in the municipal networks”, Liria commented.
Water infrastructure works have been carried out in 20 municipalities in all: Antas, Bedar, Carboneras, Cuevas del Almanzora, Huercal-Overa, Los Gallardos, Mojacar, Pulpí, Taberno, Turre, Zurgena, Albanchez, Fines, Laroya, Macael, Sierro, Somontin and Sufli, in addition to Tijola and Arboleas.
The provincial government’s new 2020-2023 Long-term Planned Budget earmarks at least another €4 million for investments in water supply infrastructure over the next four years.