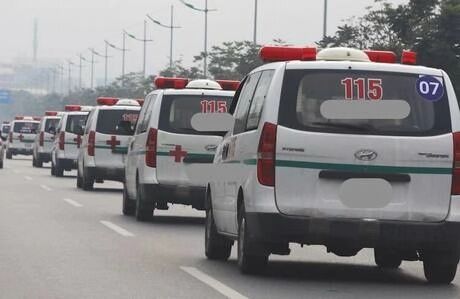 Some of the bodies of victims of the UK lorry migrant tragedy were repatriated to Vietnam earlier today.

They were met by huge crowds of sobbing relatives who have been waiting weeks for their return. Their bodies were discovered on October 23 in Essex, England.

Sixteen bodies arrived on a Vietnam Airlines commercial flight from London to Hanoi and were taken by ambulances to grieving relatives in Vietnam’s rural Nghe An, Ha Tinh and Quang Binh provinces.

Among them was the body of Pham Van Thin, 26, whose last text to her mother was: “I’m sorry mom … I’m dying because I can’t breathe.”

Her father Pham Thi Tra My said local authorities did not the family to go to the airport to escort his daughter’s coffin home over fears the family’s grief would hold up the process.

The family alerted authorities that the victims could be Vietnamese nationals, as UK police initially believed all 39 victims to be Chinese.

British and Vietnamese authorities are collaborating on the return of the remaining bodies.

Hundreds of people gathered in a church in rural Dien Chau district in central Nghe An province to greet two returned bodies, many carrying white flowers to offer the families of the dead.

The cousin of 33-year-old victim Nguyen Van Hung waited hours in the crowd near the town church for his relative’s body to come home.

Victims’ families have taken out loans from the Vietnamese government to repatriate their loved ones’ bodies, €1,635 for ashes, or €2597 for a coffin carrying the body.

Many paid more for the bodies so they could carry out traditional burials. Cremation is rare in the Vietnam countryside, where many victims were from.

Most of the families went heavily into debt to pay human traffickers in the hope that their children can reach Britain and find work.

Vietnamese nationals who have illegally entered Britain are often employed in nail bars or on cannabis farms.

Some funerals are due to start today, with burials later this week.

Maurice ‘Mo’ Robinson, 25, from Northern Ireland, has admitted being part of a global smuggling ring. He also faces 39 manslaughter charges.