A Volvo in disguise 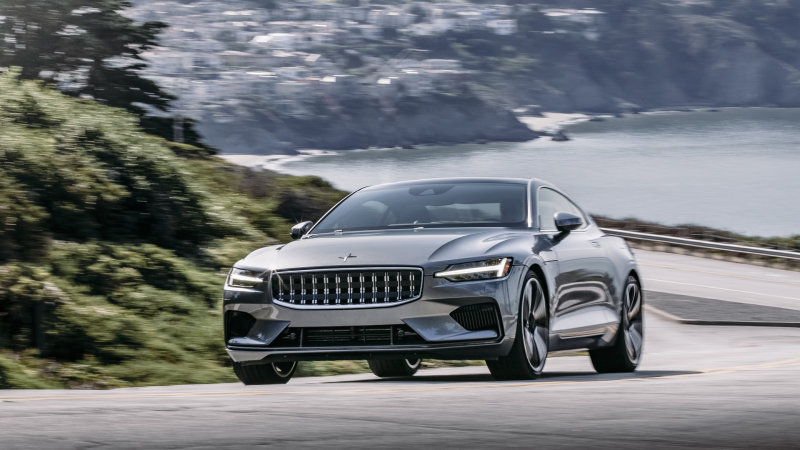 THE NEW Polestar 1 is not a pure electric car but a plug-in petrol-electric hybrid linked to an 8-speed automatic gearbox with manual override paddles. On looks alone it is eye-catching with a sophisticated sporty GT silhouette made possible by its carbon-fibre construction which has given designers more flexibility to create crisper, more elegant lines, allowing for a lower roofline and vast panoramic glass roof letting light flood in.

Each rear wheel has its own electric motor that allows for both stability and acceleration, known as ‘torque-vectoring’ when entering a curve helping keep you secure and solid on the ground when accelerating around a bend.

Boasting rocketing acceleration from rest to 62mph in just 4.2 seconds and an active rear spoiler lifts up into place at speeds from 62mph and retracts again when it drops to 44mph, though it can be manually adjusted.

Power for this smart plug-in hybrid electric car comes in two main parts working seamlessly together. Firstly, there’s a 2.0 litre inline 4 cylinder supercharged and turbocharged petrol engine developing 309horse-power (hp) and sitting on the front axle. This is linked to two 85kW electric motors the on rear axle generating which in turn generate 232hp/170kW. Adding to the mix a ‘crank integrated starter generator’ which sits between the crank-shaft and the petrol engine and develops 69 horse-power. It both acts as a starter motor and gives additional electric torque when the combustion engine is in use allowing the petrol engine to charge the on-board batteries up to 80 per cent capacity while on the move if required.

The Polestar 1 can be driven as a fully-electric vehicle at speeds of up to 100mph – even at full throttle – without the need for the petrol engine to kick in. It has an electric-only range: 78 miles. Providing the power are two high voltage lithium ion battery packs totalling 348 volts 34kWh – one over the rear seats and the other in what would be a transmission tunnel. Great claimed fuel economy of 403mpg with CO2 emissions of 15g/km.