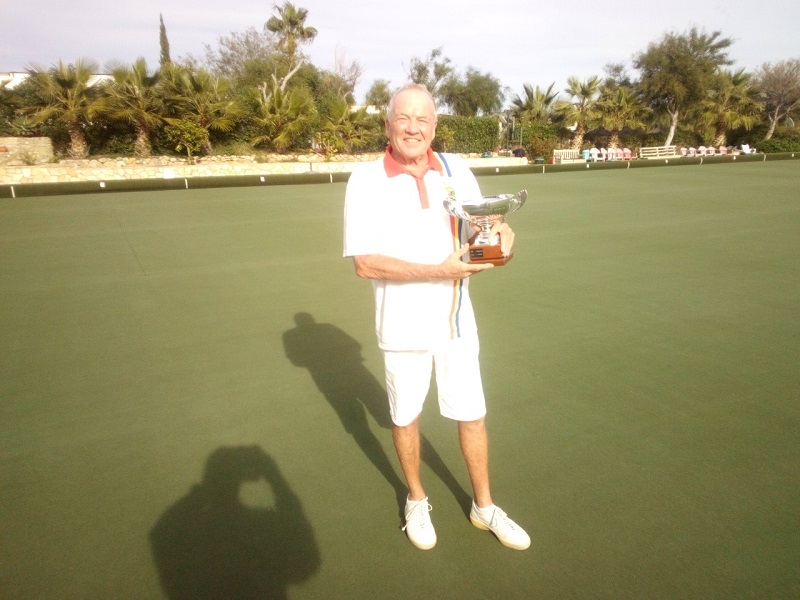 THERE was a strong turnout for the FAB Men’s Singles bowling competition, with 38 players from all the local clubs taking part.
Hosted by the Almeria Bowling Club, the competition got underway on Thursday November 21 with the preliminaries and continued up to Sunday 24, when the semi-finals and final took place.
The players all deserved medals for their efforts during the preliminaries and subsequent games as they were battered by strong winds and had to cope with cold conditions. Hats off also to the hardy supporters who watched the games.
The weather was a total turnaround on finals day. The wind died down to a murmur and the sun shone, giving an ideal day for playing and watching bowls.
The winner was Almeria Bowling Club’s Ken Richardson after beating Paul Gunter from the Cabrera Bowling Club.
Based on the play in the semi-finals it had shaped up to be a classic. Unfortunately for Paul, although playing high quality bowls he was no match for Ken on the day, who was on fire and won the championship comfortably.
Ken had got to the final by winning a very close game against another Almeria Bowling player, Bryan Thompson.
In the other semi-final Paul Gunter played Brian Hallam from Almeria Bowlwing, who although played well was unable to match Paul in the latter stages.
Almeria Bowling Club Captain Chris Brown had the honour of presenting the prizes and trophy to the finalists.
Chris thanked the markers, without whom the competition could not have taken place.  He also thanked all the umpires, Tony Lear for running the competition, Bryan Hughes for managing the green, all the competitors and last of all the supporters, who at numbered more than 50 on finals day.