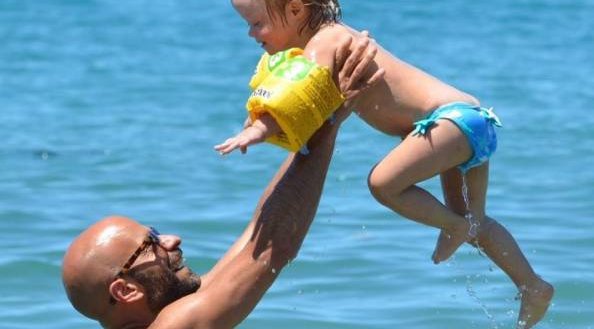 LUCA TRAPANESE, 41, from Naples, Italy, adopted his daughter, Alba, who has Down’s syndrome, when she was just 13-days-old and now reveals how happy and proud he is to be “her dad”

Luca claims that as a single gay man, he was told by social services that he would only be able to adopt a child with special needs or behavioural issues. But having volunteered and worked with people with disabilities since his teens, he was not deterred.

In an interview with the BBC Luca told his story. That when he was a young teen, his best friend fell ill with terminal cancer. Luca would spend hours with his friend, Diego, at the hospital, helping with homework and giving all his support. Luca stayed with his friend throughout the terrible, sad experience up until the end. His friend’s death left Luca with a profound awareness of what living with an illness meant. After that incident Luca started volunteering with a church in Naples to help critically ill people and kids with disabilities.

As understood by Euro Weekly News, at the beginning of 2017, the adoption process changed in Italy and Luca was informed he was able to apply for adoption, however he was told he would only be given ‘a child with problems.’

With years of experience behind him and a certain calling to aid those in need, Luca didn’t hesitate and wrote on his application form that he was happy to adopt a child regardless of their health conditions and was paired with Alba in July.

Alba, who had been rejected by twenty other families, was just 13-days-old when Luca first held her, and since then they have gained thousands of followers on Instagram from sharing their lives together.

Though Luca admits that he was initially frightened to hold the newborn baby, it didn’t take long until they connected. And when he first held baby Alba, the 41-year-old knew he was ready to be her dad.

He said: ‘She brought me happiness and a sense of fulfilment. I am proud to be her dad. I wanted her to be my daughter.’

The 41-year-old revealed Alba has a strong personality and loves being around people.