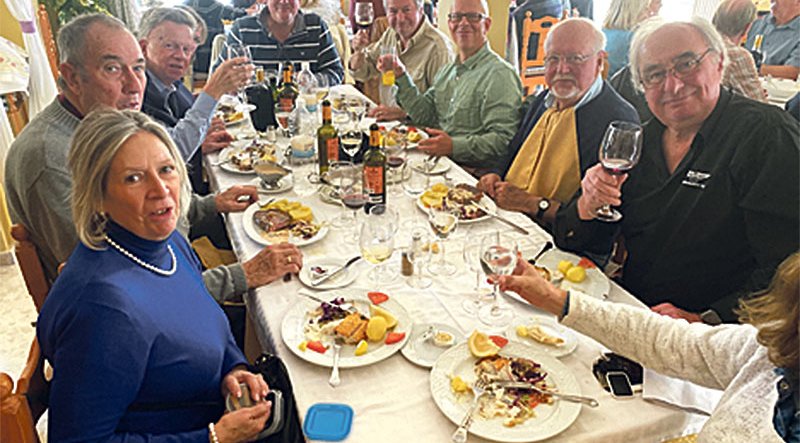 Always a good lunch to finish!

Earlier this month saw the CCCA hold its classic car run and lunch and, last weekend, was the turn of the Big Cats, the JEC (Jaguar Enthusiasts Club) to take to the roads of Andalucia and enjoy their monthly run and lunch.

Organisers, Philip and Jenny Wray, had planned a super route starting with a breakfast at Venta Jose Carlos which is situated on the Almogia road just off the top end of the Malaga by-pass.

The Venta was busy with Jaguar enthusiasts from 10.00am as coffee and bacon was consumed and participants had time to greet each other and mill around each-other’s cars.

Not every car would be a Jaguar, as the Club is for Jaguar enthusiasts who may not always have a ‘Big Cat’ available. John and Marion Richardson brought along a very pretty, bright red Pontiac Firebird whilst Angela Veglio had her glorious black V8 Audi R8 which was much admired by all.

Ian Ashworth and Claudia Langer brought along Ian’s very pretty black Lexus SC430 which is a very swish, luxurious way of getting around the countryside.

However, Jaguars made up most of the numbers and it was good to see so many different models out and about enjoying the countryside and, more important, the driving!

The XK8 seems to be a very popular enthusiasts’ choice nowadays, they are beautiful, well-appointed and powerful cars that are reliable, well-built and relatively easily available without stretching budgets. They are also very comfortable to travel in and have cavernous luggage space!  That reflects in both JEC and CCCA clubs here in Spain as there are usually a number of both convertible and fixed head versions out on these events.

Philip and Jenny Wray have a very pretty, black, convertible XK8 and there were many others presented at the start along with a brace of F-Types in both convertible and fixed head form. Older XJ variants were plentiful, taking their occupants around the countryside with the usual ‘Grace, pace and space’ as the Jaguar adverts always proclaimed!

Later XKR Jaguars, the new shape, supercharged variants are also popular and not expensive to buy and run. Two or three were out including a red convertible in the hands of Jack Weiss and another black convertible run by Andre and Jose Vieleers.

After an 11.00am briefing by top JEC man, Philip Wray, the route set off north, by-passing the lakes and heading through Almogia.  A stunning and very enjoyable piece of road but needing great care with many cyclists descending the hill at speed and using rather a lot of both sides of the road… From Almogia, the route headed still further north where, when reaching the village of Pastelero, turned off west to head over the mountain just below the Torcal, south of Antequera.

Here was found some rarely used roads that gave staggering views out over the Torcal which were enjoyed before the route came through La Joya, joining the main Torcal loop before turning south through Vale de Abdalajis and on through Alora.

A coffee stop was most welcome at ‘The Barrels Bar’ or, to give it its correct title, Bar La Herradura, in Zalea and another opportunity for a chat and a look at the cars before heading off again across the new road by Vilafranco del Guadalhorce, by-passing Coin, to head towards Mijas and a very welcome stop for a glass of cava at Barranco Blanco in the woods there.

From here, participants headed towards Mijas, turning off to go down the A-7053 and skirt Entrerrios before coming into La Cala de Mijas and finishing for lunch at Restaurante Ole just outside the village near La Cortijera.

After a much-needed ‘Copa de Bienvenida’ the lunch menu started with cold Iberian meats and Manchego cheese, fried prawns, clams in a butter sauce and home-made croquetas. Main course had a choice of fillet of pork, entrecôte steaks or a loin of cod baked in butter. The meats came with a choice of sauce and the pudding was a marvelous, blackcurrant cheesecake.  A generous allowance of pink, white or red wines was provided and most all agreed that this, for €30, was good value indeed.

The CCCA will be busy in December.  On the 3rd, next Tuesday, the Club will have its annual Christmas Party at Treetops Restaurante in El Chaparral.  This will be a ‘Black tie and Posh Frocks’ affair, there will be canapés and cava served on arrival and the Club will be entertained for dining and dancing by the fabulous Karen Cooper. This is a members only evening, but members’ guests will be most welcome.

The CCCA will also run its annual Christmas classic car run and lunch on Saturday, December 7. The start venue has yet to be decided, but the finish will be at Restaurante Valparaiso, near Mijas, where prizes will be presented for the best Christmas-dressed crew and the best dressed car too! This is always a really fun day with most members getting in to the Christmas Spirit.

There is a plan to have a special ‘Boxing Day’ run too, but we’ll have more information on that in our next issue.

Until, the next time,
Ian Giles