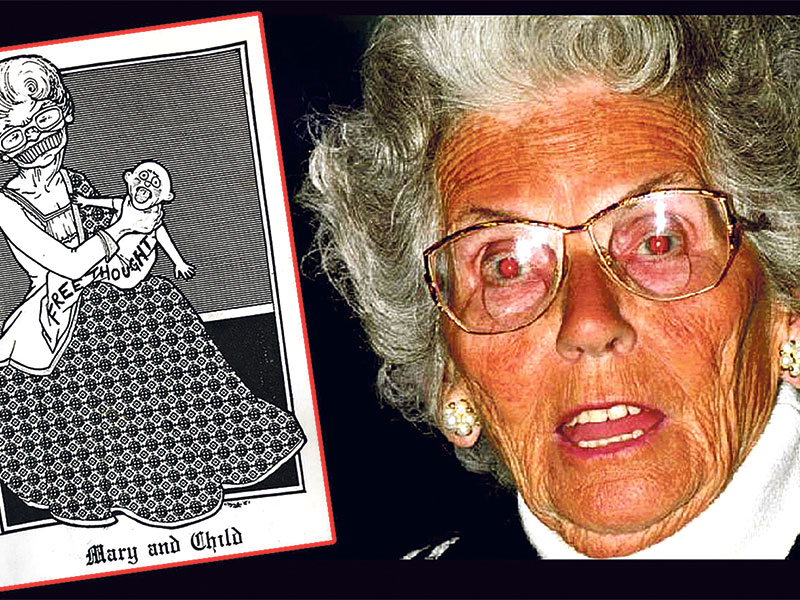 MARY AND CHILD: A greetings card which was surprisingly popular, and Mary Whitehouse.

REMEMBER Chuck Berry’s suggestive single, ‘My Ding-A-Ling?’ The BBC aired the song when it was released in 1972, and as a consequence it did pretty well on the charts.

But sales really took off when Mary Whitehouse, self-appointed morality campaigner, picked a very public fight with the corporation, and demanded that it be banned.

In a letter to the then BBC Director General, Charles Curran, the ghastly Christian busybody fumed: ‘One teacher told us of how she found a class of small boys with their trousers undone, singing the song… We trust you will agree with us that it is no part of the function of the BBC to be the vehicle of songs which stimulate this kind of behaviour…’

Curran effectively told Whitehouse to take a running jump at a rolling doughnut, and gleefully pointed out that her crusade against ‘My Ding-A-Ling’ boosted its popularity.

He wrote: ‘We decided that it could be broadcast… We did not think it would disturb or emotionally agitate its listeners and we believe that the innuendo is, at worst, on the level of seaside postcards or music hall humour.’

This was a delicious example of The Law of Unintended Consequences. Another, and far more important example, was Whitehouse’s complaint that all of her Good Works – including prosecuting Gay News for ‘blasphemy’ – were being undermined by, among others, ‘the humanist gay lobby.’

No such a lobby ever existed. It was purely a figment of her paranoid imagination, but it inspired a band of humanists and atheists ‘ myself included ‘ to launch just such a movement, and on one momentous day in 1979 we met up to form the Gay Humanist Group, later to become the Gay and Lesbian Humanist Association (GALHA).

I, together with my late partner Brian Parry, formed a small publishing company called Parry-Duke Enterprises to take care of the group’s communications requirements. We published a regular newsletter, and in 1981 created a festive ‘Mary and Child’ greetings card, which proved surprisingly popular.

I was reminded of the work we did with the group – now called LGBT Humanist – when, a few weeks back, I received an invitation to a lunch in London to celebrate the 40th anniversary of the group that Brian and I helped form.

The invitation from LGBT Humanists for the November 24 event contained a message from Andrew Copson, Chief Executive of Humanists UK that said: “As well as fighting hard-hitting campaigns to combat religious bigotry and homophobia, the Gay Humanist Group led the way in providing humanist weddings to same-sex couples even in its early years.

“Battles we have fought for decades are not yet won, and we cannot take our victories – including ending Section 28, decriminalising gay sex and same-sex marriage – for granted. In the current climate, we must be vigilant to make sure progress for which we have fought so hard is not undone, or reversed.”

Nothing would have pleased me more than to join the celebrants, but sadly a full diary made the trip to the UK impossible.

Unless I’m called to Glory Everlasting in the interim, I’ll definitely attend the 50th anniversary.