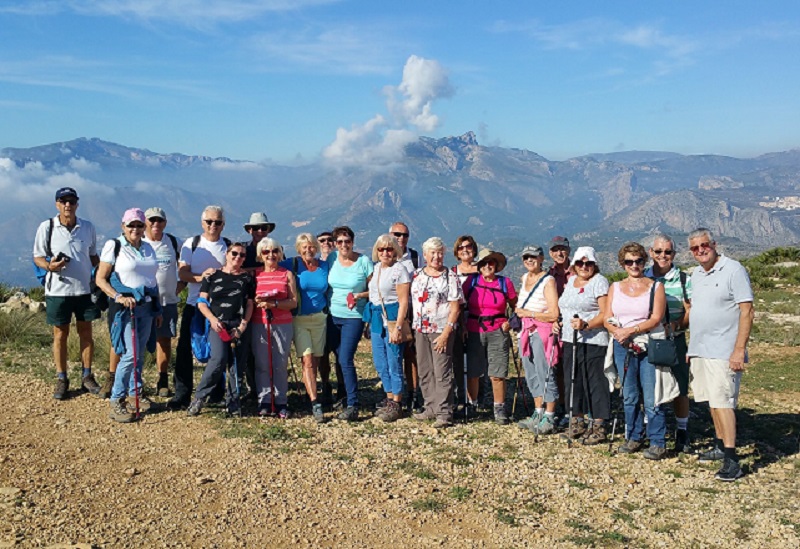 GOOD TURNOUT: Both the Monday Ramblers and the Wednesday Wanderers got off to a good start this season. CREDIT: U3A Vall Del Pop Walking Groups Back in the Swing on the Costa Blanca

THE U3A Vall del Pop walking groups are back in the swing.
Paul and Jan Leniston reported the Monday Ramblers made a very promising start to the new season, despite the less than perfect weather.
The numbers on each walk are limited to about 16, so that everyone knows everyone else, but for most walks there are still a few vacancies.
For the first walk on October 7, a group of 16 set off to walk in the valley from Jalon to Parcent, with a banana stop at Alcalali and a picnic lunch at font in Parcent.
On October 14, a group of 13 started from Benimeli for a steady climb up to the Aerials overlooking the village and ending at a bar for a welcome drink.
The on October 28 11 walked from Parcent to Benichembla, via Murla, which included crossing a river three times – fortunately it was not too deep after the rains.
The Wednesday Wanderers’ Alan and Pat Cuthbert said there had been a good turnout for these less strenuous walks.
On November 6 a large group walked to the Bernia Fort. The scenery along the route was spectacular, and the walk was followed by a well-earned lunch at a restaurant.
The U3A Vall del Pop offers walks on Monday, Wednesday and Thursday, promising good company and spectacular scenery while getting fresh air and getting fitter.
For further information on U3A Vall del Pop check the website www.u3avalldelpop.com.
The U3A is all about enjoyment and learning, and this is particularly evident in the U3A Vall del Pop, whose members hold their general assembly generally, fiestas and holidays permitting, on the first Thursday of each month at the Centre Polivalent in Murla.
There is a diverse range of some 30 groups.