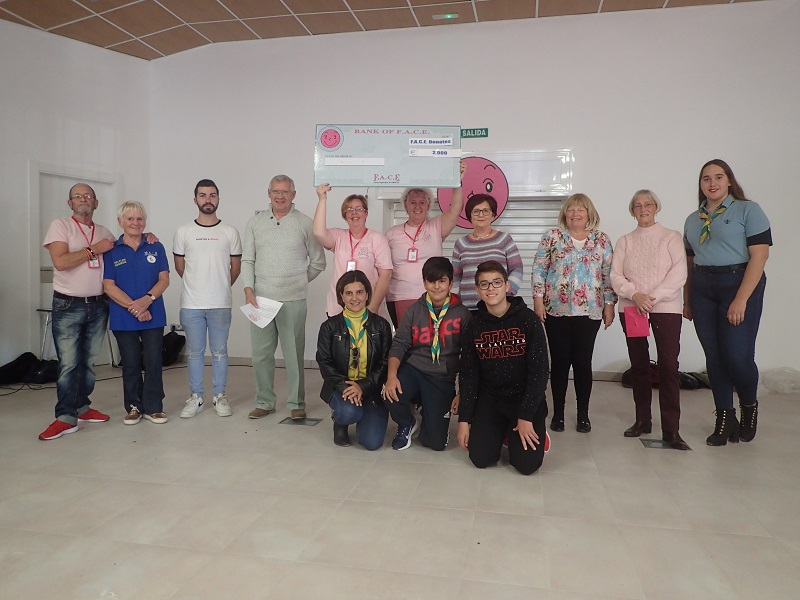 THE venue move for the Fundraising in Arboleas Caring for Everyone Christmas market proved to be a resounding success.
This year’s event was staged in the new Arboleas community centre building at the end of November, and attracted more than 700 people.
Things got going with the opening of the market by Sharon, Stephen and Shaun Garner from the Channel 4 television programme Sun, Sea and Selling Houses.
Sharon cut the ceremonial ribbon with a little assistance from F.A.C.E. President Carrie Ann Earl. There was then an impromptu auction for five fantastic flower arrangements created by Sharon created and donated to F.A.C.E. by Sharon Garner herself. There was also a beautiful watch donated by one of the charity’s supporters.
There was over 40 stalls, 25 indoors and 15 outdoors, selling all types of merchandise, mulled wine and mince pies. Santa Claus was there to share time with the F.A.C.E. market customers and children.
The All Aloud Choir led by Donna Walker provided Festive Season sounds with their fabulous arrangements of traditional Christmas Carols. There were more Christmassy tunes from award-winning singer Carol George. Round off the entertainment were Carrie’s Dusty Boots, who brought the house down with their superb line dancing demonstration.
A number of the organisations F.A.C.E. supports got early Christmas presents in the form of money donations. Mojacar Area Cancer Support (MACS) a regional charity received €500, as did the the Asociacion Española Contra el Cancer (AECC) and the Association for the fight against Kidney Disease (ALCER).
Local associations The Little Owls and Grupo Scout 106 del Saliente were presented with €250 apiece.
The main €200 cash prize in the F.A.C.E. Christmas raffle went to Daphne O’Connor. A further 20 other prizes were up for grabs: there is a complete list of winning numbers and prizes on the F.A.C.E. Facebook Page.
The main aim of the afternoon however was to raise cash for good causes in the future, and the market certainly did, collecting a grand total of € 3,442.50.
F.A.C.E issued a big thanks to all the businesses which provided support and prizes. Also to all  the stallholders and to everyone who attended, stressing that without the dedication of their supporters, the charity would not be able to achieve anything.
Anyone interested in finding out more about F.A.C.E. or making a donation can contact the charity on its new telephone number 643 602 402, via the website www.face-charity.com, by e-mail at [email protected] or via the F.A.C.E. Facebook page.