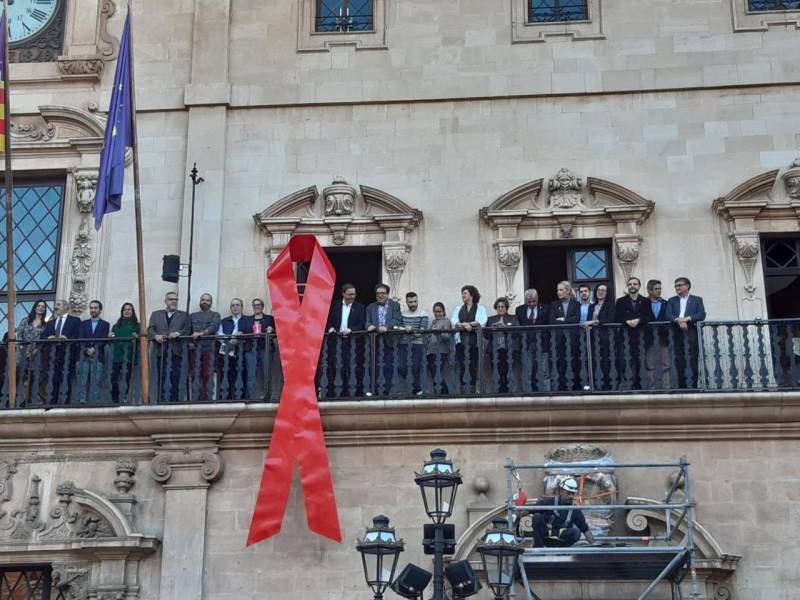 IN an act to mark World AIDS Day, a red ribbon has been hung outside of Palma Court in Mallorca, Spain.
Members of the council united in the capital on Sunday, December 1 to unveil the bow, standing in solidarity in the fight against HIV and to commemorate those who have died from an AIDS-related illness.
Mayor Jose Hila reaffirmed the city council’s commitment to the Paris Declaration which was approved unanimously in September 2018, that guaranteed the introduction of measures to end this health epidemic.
Hila announced that they will continue to carry out initiatives for their ‘Pisa stigma’ campaign, where a space will be created within institutions to strengthen primary health care and to eliminate the stigma that is attached to people living with HIV.
Joan Lluís Llull, President of the Association for the Fight against AIDS in the Balearic Islands (ALAS), joined the presentation, stating that by 2030, their aim is to “have 95% of people diagnosed with 0% of stigma.”
The act was followed by an ALAS gala at Teatre Xesc Forteza, where members of the public were invited to watch performances on stage and view an exhibition by Idoia Fradejas, who collected photographs and testimonies of people living with the illness. Here, the ALAS Prize was awarded to Sebastià Mascaró for his dedication to education through art which pays special attention to the most invisible groups.
Founded in 1988, World AIDS Day was the first ever global health day whose objective is to increase awareness, fight prejudice and improve education across the globe. Statistics indicate that in 2018 in Spain, 30% of people with HIV are unaware that they have the illness and 50% of the diagnoses are delayed.
Today, thanks to research and a new generation of medicine, it has been possible to keep those infected with a good level of health, which has resulted in a marked improvement in their quality of life. However, the pandemic continues to grow, and in response, ALAS has launched pioneering projects throughout the Balearic Islands to provide clear information about the issue and to alleviate the prejudice that is held towards the HIV infection.