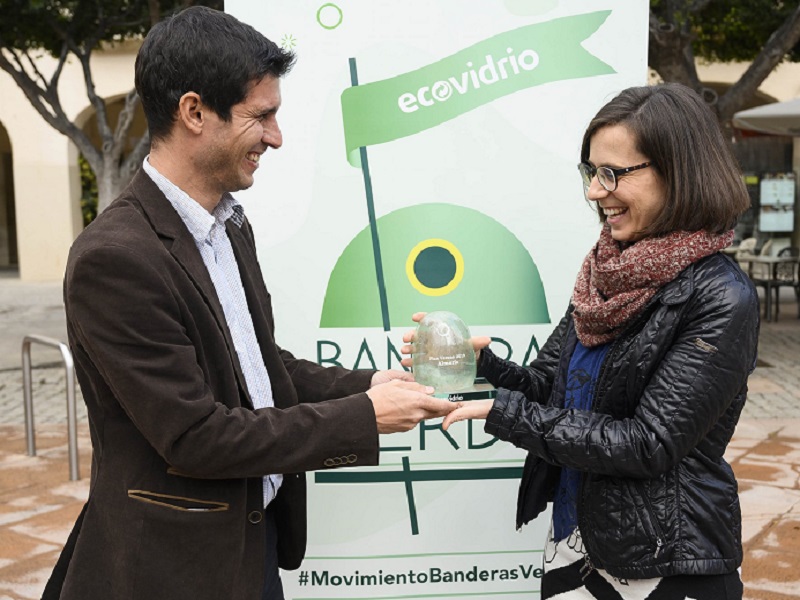 REWARD: Ecovidrio has rewarded the city for its contribution to the fight against climate change and to protecting the coastline. CREDIT: Ayuntamiento de Almeria Facebook

ALMERIA has been rewarded for its glass recycling record.
The city has successfully met the challenge set by the Green Flags Movement, an initiative put into action by the Ecovidrio non-profit organisation which manages glass recycling across the country, substantially increasing the amount of glass which was recycled over the holiday season.
Last week Ecovidrio regional delegate Jesus Gutierrez presented Environmental Sustainability councillor Margarita Cobos with a distinction in recognition of “Almeria city’s commitment to the fight against climate change and the protection of the coast through recycling glass throughout the summer.”
“I am very proud of the response of Almerians and of the 92 establishments which have participated in this challenge, which we have surpassed, managing to collect in the summer months in the 598 green containers, 41 per cent more than in the same period last year, Cobos commented, also repeating the council’s commitment to recycling.
Both the Ecovidrio delegate and the councillor stressed the importance of recycling in the catering trade.
“Fifty per cent of the glass which the city generates comes from the catering”, Gutierrez pointed out.
With this in mind the city council has backed the campaign environmental raising awareness in Almeria’s bars, hotels and restaurants, especially at busy times for tourism when there is increased consumption.
Recycling glass is a key element in avoiding the over-exploitation of resources and fighting climate change, the councillor affirmed.
She said Almeria’s glass recycling efforts had meant preventing the emission of 347 tonnes of CO2, the equivalent of removing 162 cars from the roads for a year.
Cobos said that in general 2019 has been a very good year for recycling in Almeria. She cited Ecovidrio figures covering up to October which reveal that Almerians recycled 1,756 tonnes of glass over 10 months, 33 per cent more than in 2018.
“This shows that Almeria is advancing in recycling and taking major steps along the road”, she remarked.
The councillor said the city administration planned to continue with recycling awareness-raising campaigns “so that increasingly more Almerians think about the future of the planet which we want to leave for future generations and recycle, whether it is glass, paper, cardboard, plastic or batteries.”