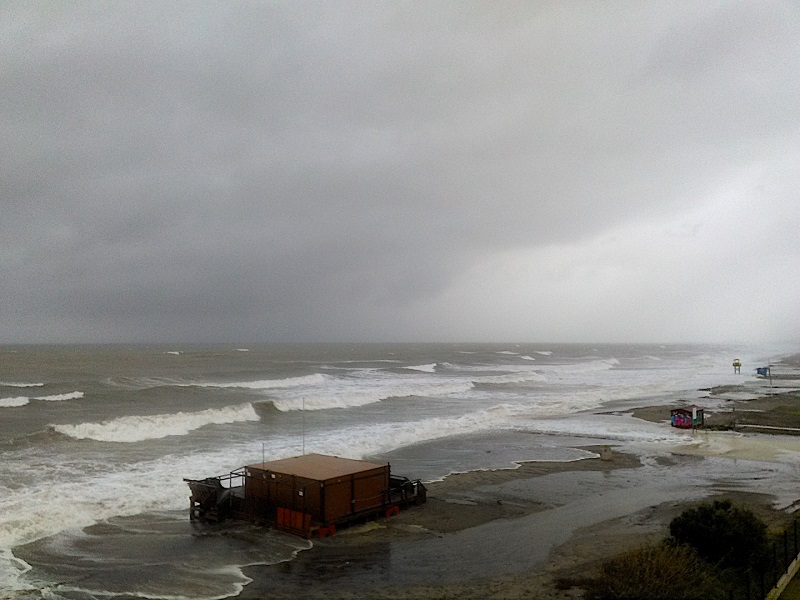 THE storms which hit the Costa Almeria this week saw exceptionally rough seas pound Vera Playa, prompting renewed calls for better beach defences.
The waves come right up to the back of the beaches, leaving the sand in a sorry looking state.
Vera Playa resident Stephen Brooks-Brown pointed out this was by no means the first time high seas have hammered Vera’s coastline, damaging infrastructure and facilities situated on municipal beaches.
Stephen told the Euro Weekly News he believes more should be done to better protect this stretch of coast from the impact of stormy weather.
“All they seem to do every time in preparation for winter is just move sand down from the Puerto Rey end to down near the naturist hotel and widen the beach out, which doesn’t really do anything”, Stephen commented.
“Our concern is there won’t be much of a beach left if it continues like this every year.”
A businessman operating in the naturist zone shares Stephen’s worries. Natsun manager Jan Stuyvesant told EWN he sees a good long-term defence for the whole of Vera beach as a large groin extending out from Garrucha port, his opinion based on a study he commissioned a maritime engineer to carry out.
Responsibility for the beaches lies with the Environment Ministry. Jan explained that back in 2003 the ministry’s coasts department came up with a project grandly titled the Environmental Recovery of the Beaches between the Mouth of the River Almanzora and Garrucha Port.
The project was, Jan says, partially put into action in 2007, but the wrong way round. Or as he put it, “like building a house starting with the roof, and forgetting the rest.”
He describes it in fact as “a major mistake technically speaking, which has cost more than 1,000,000 cubic metres of sand.”
The first step, Jan insists, should have been the 267-metre long groin he said was included in the original ministry project. He maintains the groin would consolidate the beach and provide release on the change of the currents, benefitting the whole of Vera Playa.
But he claims that in the way the project has been actioned it has done virtually nothing for the northern part of Vera’s coastline, and has only extended the beach near to the naturist hotel.
“The physical proof is therefore there that it can work, but the effect of erosion this intervention has caused to the south virtually up to the mouth of the river Antas is terrible”, he commented.
The issue of the groin appears to currently be up in the air, Jan told EWN.
Meanwhile, he and other local residents and business people are running out of patience, while “relatively easy solutions could produce major positive effects.”
Vera council confirmed to EWN that beach defences are an important issue for the administration, but the matter is down to the Environment Ministry.
mportant issue for the administration, but that it is down to the Environment Ministry.