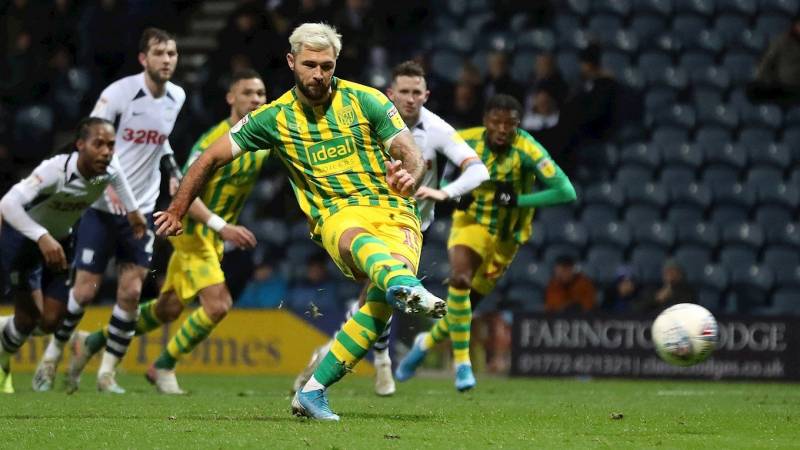 A last-minute Charlie Austin penalty helped Albion return to the top of the Sky Bet Championship with a fifth-successive victory on Monday night.

Despite a dominant performance Slaven Bilić’s side found themselves heading into the final minute level at 0-0, with Leeds having taken top spot over the weekend but when Kyle Edwards rushed through on goal he was unfairly tackled by Declan Rudd, and ref  Oliver Langford had no hesitation and pointed to the spot.

Charlie Austin scored  sending Rudd the wrong way before side-footing his penalty into the bottom-right corner – creating scenes of jubilation in the away end amongst Baggies fans!

Bilić named an unchanged side after a 4-1 victory against Bristol City last Wednesday.

The early stages of the game saw Albion dominate possession, but it took until close to the 45th minute mark to create the first shooting opportunity of the evening to excite their vocal away following.

Nathan Ferguson picked the ball up in his own half and beat his man. The young full-back powered forward and Preston’s backline parted, allowing him to rifle a shot at goal, which Rudd managed to tip over the bar.

Preston  went close next. Sean Maguire found himself unmarked in the Albion penalty box following a throw-in and hit a shot which Sam Johnstone had to turn around at his near post.

Bilić’s side bounced straight back, though. Matt Phillips found a yard on the edge of the Preston box and hit a curling left-footed effort just wide before whipping in a superb free-kick to the back post which Kyle Bartley couldn’t quite turn in.

Phillips continued to be at the centre of the Baggies’ attacking intent, hitting a shot onto the turn straight at Rudd.

Albion continued to control the ball as they searched for a way past the hosts’ resolute defence, and once again Phillips found space on the edge of the box and hit a low effort, which Rudd again got his hands to and tipped wide.

Plenty of possession eventually paid dividends though when Baggies Kyle Edwards burst through on goal and went round Rudd, who tripped the Albion winger, with referee Langford pointing straight to the spot.

Austin stepped up to tuck the penalty into the corner, adding the perfect ending to a convincing away performance from the Baggies.

West Brom went back to the top of the table leaving their many travelling fans with a cheery trip home.