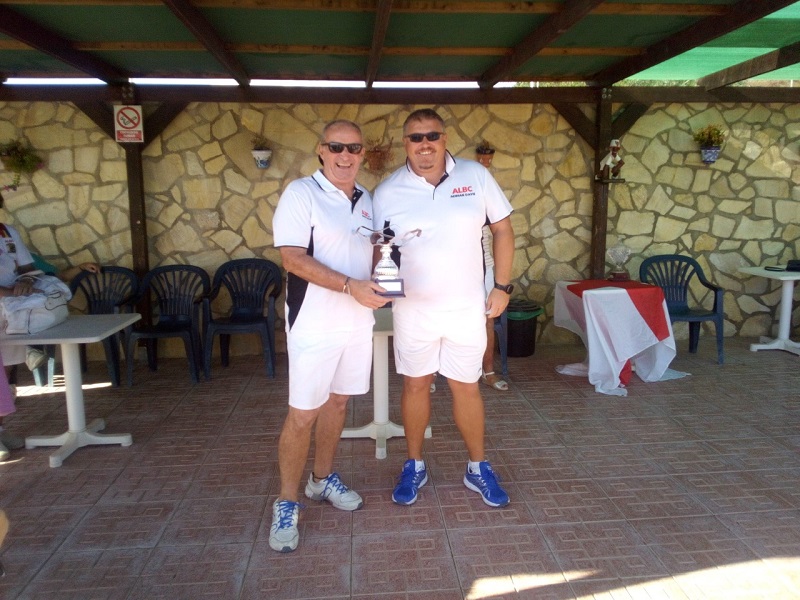 THE weather was kind for the finals of the FAB men’s and ladies pairs bowling on the Costa Almeria.
The competition got underway on November 28, the ladies playing at Indalo Bowling Club and the men at Almeria Bowling Club. Both finals were then held at the Almeria club on Sunday December 1.
Fortunately it stayed fine and sunny throughout.
In the ladies’ event, Judy Abel and Chris Parkinson from the Indalo Bowling Club won against Eileen Phoenix and Carol Roberts from Almeria Bowling Club.
The winners in the men’s event were Adrian Davis and Mark Naylor from Almeria Bowling Club after beating Adrian Sussex and Keith Lester from Indalo Bowling Club
The ladies’ final was good to watch. Carol and Eileen went ahead on the ninth end, but Judy and Chris levelled up on the 10th. Judy and Chris then applied pressure to not allow Eileen and Carol to score further until the last three ends. However, the points scored here was not enough to take the lead, giving Judy and Chris the championship.
There was great expectation about the men’s final after both pairs gave strong performances in the lead-up. It certainly lived up to the anticipation, with nip and tuck throughout the competition. Keith and Adrian were ahead 13-10 on the 16th end. The next end saw two shots scored by Adrian and Mark, but with Keith and Adrian still one shot ahead 13-12.
On the 18th Keith and Adrian were holding shots, which effectively would have been a score hard for Adrian and Mark to beat. Then with his last wood Adrian went ahead, taking the end by one shot and levelling the score 13-13.
An extra end was then played. More excitement again when Keith and Adrian were again holding winning shots. On his first bowl Adrian Davis played a controlled drive, splitting the head and giving Adrian and Mark a one-shot lead with the Jack very close to the green border. This proved to be the winning shot, as Keith and Adrian were unable to take the match it, giving Adrian Davies and Mark Naylor the championship
At the end of competition Almeria Captain, Chris Brown presented the prizes and trophy to the finalists. He thanked all the umpires, Tony Lear for running the competition and Bryan Hughes for managing the green. He also thanked the competitors, and last of all the supporters, who numbered around 50 on finals day.