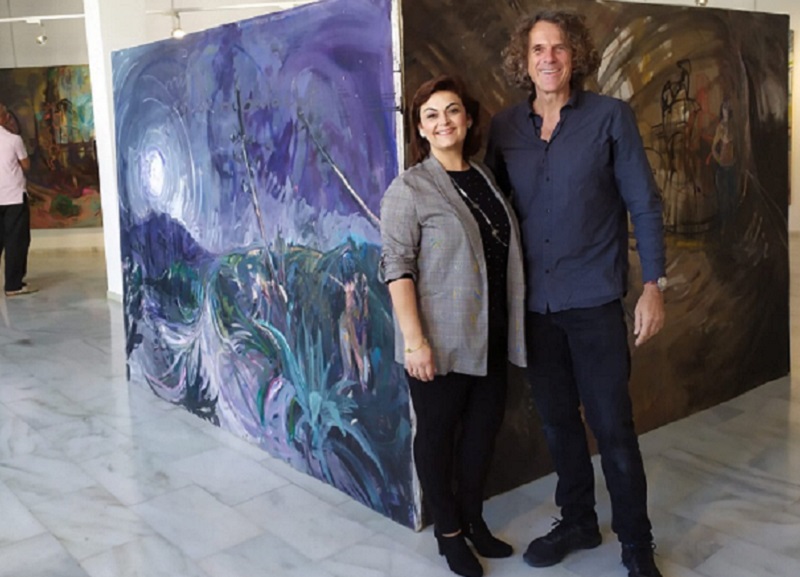 INTERNATIONAL artist Thomas Neukirch is once again exhibiting a selection of his works in Mojacar.
German-born Thomas spent time living and working as an artist in Mojacar, which was his first residence in Andalucia, and although he now lives in Cariatriz he has maintained his artistic ties with the municipality.
This latest exhibition at Mojacar’s La Fuente Art Centre includes seven large oil paintings, several of which have already been on show in Paris and Germany, which express mans’ anxiety and restlessness.
As a contrast there is also an outstanding collection of smaller works done in Chinese ink and displayed originally on bamboo canes, which depict scenes of everyday life, busy times or relaxing in moments of peace and quiet.
Mojacar councillor Ana Garcia was at the recent opening of the show to hear directly from the artist about the processes of his work, although it is far from the first time he has exhibited in the village, along with a large number of admirers always keen to view his latest creations.
Thomas originally studied Fine Arts at the Academie des Beaux Arts in Lyon before going on to teach at the Jean Bertholle Academy of Fine Arts in Paris, where he lived until 1996.
From 1990 he exhibited on a regular basis in galleries across France, Spain, Germany and Argentina. A number of his works are on permanent show at the Galerie Andreas Henn in Stuttgart and in the Galerie Peinture Fraîche in Paris, as well as in public collections in Baden Württemberg and in Andalucia.
There is free entry to the Mojacar exhibiton, which is open Tuesday to Sunday from 10am to 1pm until December 15.