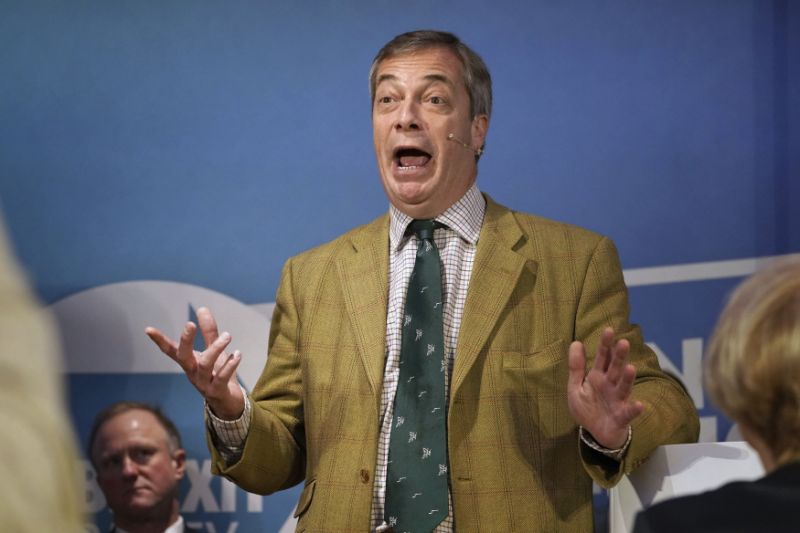 NIGEL FARAGE’S Brexit party has been thrown into chaos after four members, all MEPs, quit and urged voters to vote for the Tories in the election to ensure Brexit happens.

Annunziata Rees-Mogg, the sister of cabinet minister Jacob Rees-Mogg, along with businessmen Lance Forman and John Longworth, and Lucy Harris announced in a joint video that they were “passionate democrats who believe the result of the referendum must be fulfilled . . . and while this [exit] deal is not perfect it is sufficient to remove us from the gridlock.

In a show of support for PM Boris Johnson and his proposed Brexit withdrawal deal, the four urged voters on Wedneseday: “Even if you and your family have never voted Conservative before — this is a unique time in history.”

The Brexit party swept the European elections this year, and its popularity soared but since then has struggled to retain support, and now rates low in the election rankings.

At the beginning of the election campaign, the party withdrew its candidates in Conservative-held seats after a backlash from its supporters over the risk of splitting the vote in Leave-backing seats, which would have seen Labour win.

Mr Farage and the party blamed the personal circumstances of the four which may have affected their decisions to leave the Brexit party the party.  A spokesman said: “One of the MEPs is the sister of a cabinet minister, another has a partner who works in the office of the same cabinet minister and yet another is a personal friend of both Boris Johnson and Michael Gove (cabinet secretary).”

Brexit Party founder Catherine Blaiklock today claimed on LBC that the party was “finished” after the resignations.

Meanwhile Mr Johnson himself came in for some flack yesterday when he appeared on ITV’s This Morning programme and was asked about a 1995 magazine article in which he called the children of single mothers “ill-raised, ignorant, aggressive and illegitimate.”

Presenter Holly Willoughby suggested this was ” hurtful that is to someone’s feelings,” to which Mr Johnson replied: “I don’t think this is the time to talk about articles that were written a very long time ago.”

However, just last year he called Muslim women who wear veils over their faces “letter boxes” in a newspaper column.

But asked about this and other comments yesterday, he said he was sorry if his words caused hurt, but failed to apologise.

And Mr Corbyn is today reeling from a leaked dossier in which he is accused of covering up institutionalised antisemitism within his party.

The Jewish Labour Movement yesterday submitted a 47-page report to the Equality and Human Rights Commission detailing 70 whistleblowers describing 11 occasions when Mr Corbyn “associated with, sympathised with and engaged in antisemitism.”

The Jewish group urged voters to “look to their conscience” before voting Labour.