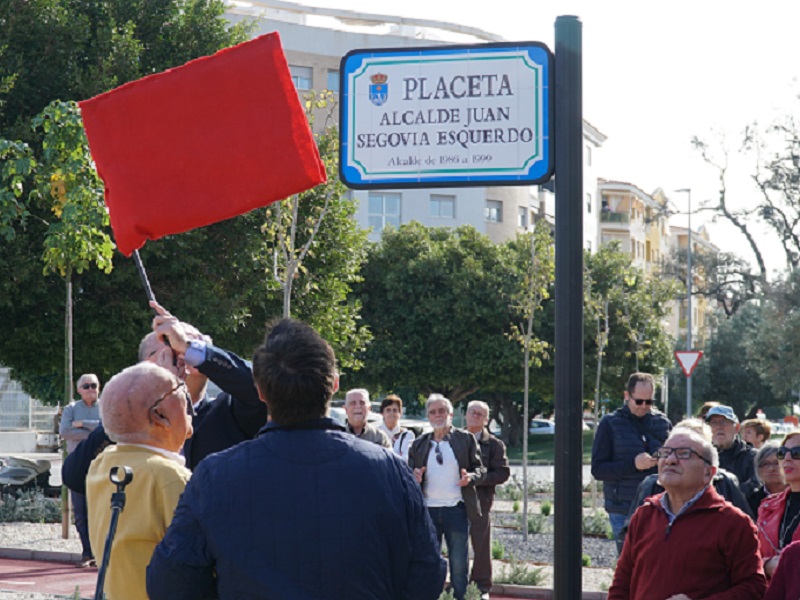 PRIDE: The current mayor described Segovia Esquerdo as a “man of the people” who dedicated himself to serving the people of Villajoyosa. CREDIT: Ayuntamiento de Villajoyosa

VILLAJOYOSA council has honoured former mayor Juan Segovia Esquerdo by naming a new gardened square in the town after him.
Current mayor Andreu Verdu oversaw the official inauguration of the plaza bearing the name of the former socialist local authority leader on Saturday morning.
He said the move was “a very deserved recognition for a person who did so much for our town.”
Verdu described Segovia Esquerdo as “a man of the people, humble and self-taught”, adding that he had the desire and the know-how for “dedicating his abilities and strengths to the service of the people of Villajoyosa with great success.”
He ended, “This plaza which today carries your name is a sign of Villajoyosa’s pride on having had a great mayor.”
Juan Segovia Esquerdo was himself at the inauguration ceremony, a spokesman addressing the gathering on his behalf.
“I want to give thanks to the municipal corporation for its unanimous decision, to the Huit de Maig association for the initiative, to the many people who accompanied me on my journey as mayor, and to my wife, my children and my granddaughter, because my family has been a fundamental element without whom I would not have been able to be mayor”, he told those present.
The ex-mayor also thanked all the people in attendance for their “demonstrations of affection, and especially the people of Villajoyosa, who I love so much, for this recognition I will never forget.”
The new square stands on municipal land next to Calle Musico Tito. The council said it provides improved access for pupils at the Mare Nostrum school.