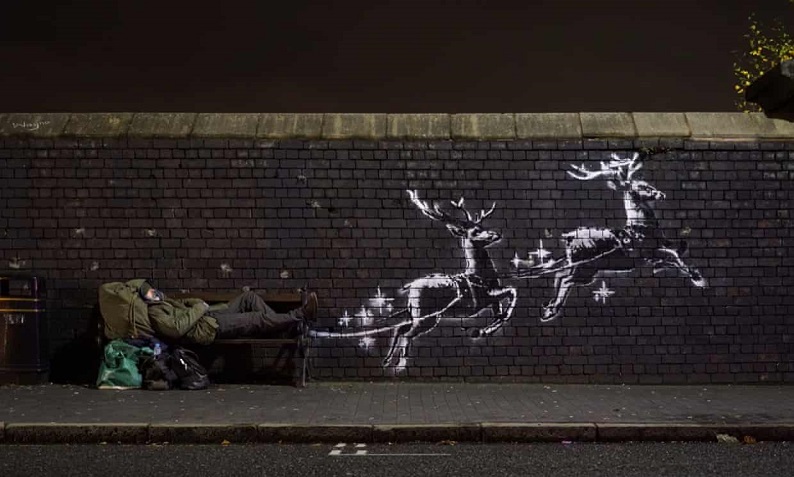 The street art, which appeared in Birmingham’s Jewellery Quarter over the weekend, was vandalised on Monday. Banksy’s newest reindeer mural appears to have been vandalised days after it appeared in Birmingham’s Jewellery Quarter. The vandal added red noses to the reindeer on Monday night. The mural, as depicted on Banksy’s Instagram account, shows two reindeer pulling a homeless man on a bench. It was painted by the enigmatic street artist over the weekend.

The short film, posted on Banksy’s Instagram, https://www.instagram.com/banksy/, was viewed over 2 million times in just seven hours. The video shows several people stopping to give Ryan food and drinks. Banksy praised the generous strangers. Banksy’s video shows the homeless person, Ryan, having a drink before lying down on the bench as the camera pans out. The artist added the comment: “God bless Birmingham. In the 20 minutes we filmed Ryan on this bench passers-by gave him a hot drink, two chocolate bars and a lighter – without him ever asking for anything.”

Was it actually Banksy?

A commuter who happened to pass by on her way to work on Friday morning claims she saw a man setting up close to the wall. She said: “It was around 7 o’clock on Friday morning when I got off the bus and saw a man giving a few snacks to a homeless man who was sitting on the bench. I wouldn’t have thought it was Banksy, I just thought it was someone helping out the homeless. ”Martin Clarke, a jeweller at Vault 88, claims to have seen two workmen early on Friday morning working on the wall which is directly outside his shop. “I saw a small tent with a couple of lads in high-vis vests early in the morning on Friday. I thought they were from the council and were just doing a bit of upkeep. About half six I looked out the window and the tent had gone as had the lads. Then I saw it. “I thought it was great. We weren’t sure what it was at first or who did it but we had a good idea.”