Uk:The Queen’s strict Christmas ritual is revealed, from menus written in French to her ‘strong’ martini! 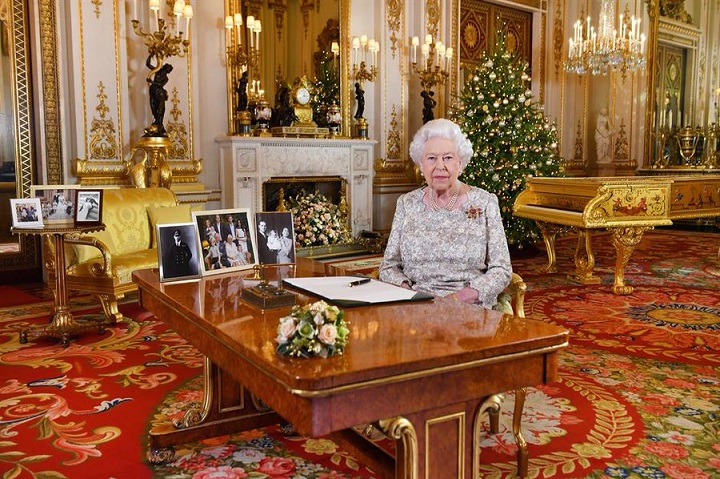 The Queen’s Christmas Day ritual has been revealed in a new documentary.

The Royal Family traditionally spend the Christmas period at Sandringham with Queen Elizabeth, 93, and Prince Philip, 98, and during this time a number of customs take place. As the head of the Royal Family, Her Majesty dictates the annual traditions. Some of these are well-known: As explained on the Royal website, the family exchange gifts on Christmas Eve and attend a church service at St Mary Magdalene Church. However, some of the lesser-known ones were revealed in the Channel 5 documentary Inside Sandringham: Holidaying with the Queen.

Before any of the festivities take place, the nonagenarian monarch is kept busy approving the royal decorations at all official royal residences, said royal commentator Dickie Arbiter. Sandringham estate is decorated in much the same way as people throughout the United Kingdom decorate their tree,” he said. “You’ve got the baubles, the tinsel, the coloured lights. “Both the Queen and Prince Philip personally sign every Christmas card sent out ahead of Christmas, Arbiter added.

“There’s no stencilling or faxing or anything like that, and the card count runs into hundreds,” he said. “All the staff get a card, then friends get a card. There are people you’ve got send cards to and people you want to send cards to, but every card is signed by both of them.”For the most part, we do not see the royal Christmas celebrations, with their festivities at Sandringham remaining a private affair.

However, we do receive some glimpses. Last week, the Palace shared pictured of the Christmas trees erected at Windsor Castle. A 15ft tree was erected in the castle’s Crimson Drawing Room, while a 20ft version was placed in St George’s Hall. Meanwhile, the Queen’s Christmas Day speech – which is filmed in October – features a hint at some of the Palace festive decorations. Last year it was filmed in the drawing room at Buckingham Palace.

Not one to be left out, Prince Philip has an annual tradition of his own, he will always put the gold star on the top of the tree, and probably will continue to do so for the rest of his life. “He’s quite a stalwart and won’t let other people take control. When any young children come they put their own decorations on.”

Christmas Eve at Sandringham begins with a drinks reception at the Norfolk Estate, beginning at 7:30pm.During this time, the Queen will make a toast to the royal chef – and hers is a strong martini. The family will then sit down to a six-course candle-lit dinner, with the menu written in French.

The day itself runs to a strict order. It begins with a Christmas Day breakfast buffet, which the family will eat in their church clothes and serve themselves (aside from the Queen, who is served by staff).The church service is followed up with a traditional Christmas lunch, and afterwards they watch the Queen’s Speech (which is pre-recorded) together at 3pm. During the day, the family also play charades and party games.