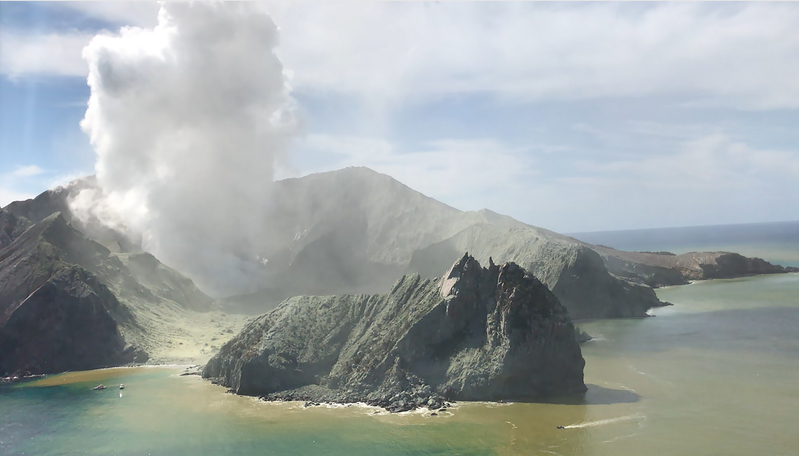 A magnitude 5.3 earthquake has struck near Gisborne, 23 hours after White Island erupted yesterday.

A magnitude 5.3 earthquake has struck near Gisborne at 1pm, five confirmed dead, eight missing, 31 in hospital after White Island volcano erupts twice
There were 47 people in total on the island, 38 of them were from the cruise ship Ovation of the Seas. Thirty-four injured people and five bodies were taken off the island by heroic rescuers in the face of extreme danger, says PM
Police say there are no further signs of life on the island, following flyovers late on Monday. Many of the victims are tourists from Australia, the UK, China, Malaysia and the US. At least one of the dead is a local man – a popular tourist guide The alert level on the island volcano was raised several weeks ago Scientists say the volcano erupted instantaneously

Police say there are “no signs of life” on White Island and they believe anyone who could have been taken from the island alive was rescued at the time of Monday’s evacuation. Five people have been confirmed dead and eight are still missing, presumed killed. Thirty-one people are in seven hospitals with a range of injuries following the instant eruption of the island volcano at 2.11pm. Some of the injured have burns to 90 per cent of their bodies and a source said they may not survive the horrific injuries.

Based on the effects of the eruption on the bodies, this recovery will need to be handled with expert skill and care. We are working to confirm the identities of those involved, including those who have died and who are injured. We are working through a complex Disaster Victim Identification (DVI) process.

The nature of the injuries that people have suffered is severe and means identifying them is a complex matter.

We are working through the process to identify them as quickly as possible, to return those who have died to their loved ones.
Earlier Ministry of Health spokesperson Pete Watson said all burns units were now at capacity. Twenty-seven of the 31 injured in hospital have suffered burns to more than 30 per cent of their body and many have inhalation burns that require airways support. Watson said Middlemore’s burns unit has received the equivalent of a year’s worth of work in one day following the eruption.