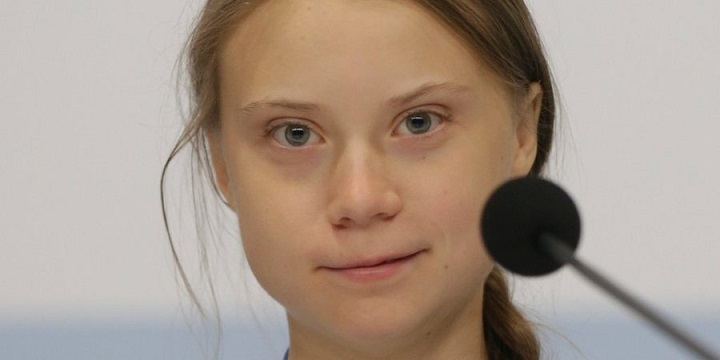 Brazil’s far-right president Jair Bolsonaro has derided Greta Thunberg ​just after the teenage climate activist added her voice to growing international condemnation of a surge of anti-indigenous violence in the Amazon. “Indigenous people are literally being murdered for trying to protect the forest from illegal deforestation. Over and over again,” Thunberg tweeted on Sunday alongside a video showing the aftermath of a drive-by shooting targeting indigenous leaders that left two dead. “It is shameful that the world remains silent about this,” the 16-year-old campaigner added.

Bolsonaro – who activists accuse of green-lighting a new era of destruction and violence with his hard-line anti-environment rhetoric – hit back on Tuesday. “Greta’s been saying Indians have died because they were defending the Amazon,” a smirking Bolsonaro told reporters outside the presidential palace in Brazil’s capital, Brasília. “It’s amazing how much space the press gives this kind of piranha,” Bolsonaro added, using a Portuguese word that loosely translates as “little brat” or “pest”. Bolsonaro had initially failed to remember Greta Thunberg’s name, labelling her simply “that girl”. Thunberg appeared to take Bolsonaro disparagement as a badge of honour, changing her Twitter biography to “Piranha”.

Thunberg is far from alone in challenging Bolsonaro over the spike in rainforest destruction and attacks on indigenous communities during his first year in power. Brazil’s Indigenous Missionary Council rights group reported in September that 153 indigenous territories had been invaded since the start of 2019 – more than twice last year’s figure of 76 – and said Bolsonaro’s “aggressive” talk was partly responsible. Recent weeks have seen a spate of deadly attacks on indigenous activists. After Saturday’s killings in the northern state of Maranhão, Brazil’s former environment minister, Marina Silva, tweeted: “This Amazon bloodbath demands a strong and swift response from Brazilian authorities. “We have been cut adrift and left unprotected by the Brazilian state,” wrote Sônia Guajajara, a prominent indigenous leader.

In a recent interview, the Amazon senator Randolfe Rodrigues said Brazil’s native peoples stood at a historic juncture as Bolsonaro pushed ahead with plans to open their lands to commercial mining. “Not since the [1964-85] dictatorship have Brazil’s indigenous peoples felt as threatened as they do now,” Rodrigues said. Her comments about the deaths of the indigenous people came as the U.N. was hosting its international climate change conference, where Brazil’s environmental policies have been the subject of criticism. Deforestation of its Amazon rose nearly 30% in the 12 months through July.