The CCCA Gets Festive! 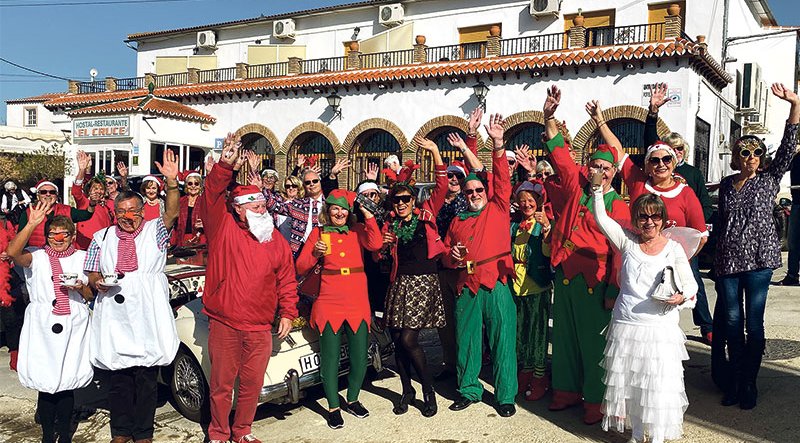 CHRISTMAS RUN: There were prizes for the best-dressed crew.

IT’S been a wonderful week celebrating Christmas, people and cars for the CCC of A.

The week started off in grand style with the Club’s annual Christmas Party and dinner, held at ‘Base’ which is, of course, Treetops Restaurante at El Chaparral Golf in Mijas Costa.  Well over 100 Club members turned out to enjoy the evening and were greeted with cava and canapés on arrival.

As is traditional with the CCCA, this was to be a ‘Black Tie and Posh Frocks’ affair and it was marvellous to see everyone, particularly the elegant ladies, so beautifully attired!

After welcome drinks, superb traditional Christmas fayre was served although numerous menu options gave a fine choice to all diners.

Entertainment was provided by the fabulous Karen Cooper who had the party-goers up and dancing in no time.  Speeches were kept to a minimum and the revelry continued until the small hours, most everyone feeling that this was one of the best CCCA Xmas parties ever!

On the Saturday of last weekend, the CCCA then moved on to organise its special Christmas-themed classic car run and party-lunch.

Around 90 CCCA members gathered at Venta Los Morenos near Alhaurin to start the Christmas Run, as it’s called, at 11.00 on a beautiful, warm, sun-filled morning under blue skies.

Most members made the effort to join in the spirit of it all and some marvellous elves, fairies and Santas graced the breakfast area before the start. Likewise, great efforts were made to turn classic and modern-classic cars into something resembling Santa’s sleigh although not all were capable of flight! Bemused customers at Los Morenos not with the Classic Car Club must have wondered what on earth was going on!

Judges were appointed to make informed (!) decisions relating to the potential winners of the competitions and all were easily bribeable!

The route itself was very enjoyable with some spectacular scenery and roads and what a sight these beautiful cars were, whizzing along the countryside bedecked in Christmas decorations and driven by elves and Santas! I’ve no idea what the collective noun is for a group of lady Santas, but they all looked quite gorgeous!

From Venta Los Morenos the route headed for Coin, turning down the A-355 towards Pizarra, joining the new road to by-pass Villafranco de Guadalhorce.  Heading then towards Ardales on the A-357 the route turned up towards Alora Norte passing by Venta los Conejitos and taking the stunning but winding and narrow road up through to Carratraca. On in to Ardales where a coffee stop was arranged just upon entering this lovely little town. This was also a great opportunity for photos of the cars and the crews in their festive apparel, some of which you can see on this page.

After coffee crews headed along the beautiful and scenic road to El Burgo, then heading back to Coin and on up to Mijas and a well deserved lunch at Valparaiso restaurant where cava and canapés awaited.

A marvellous Christmas lunch (yes, another!) was served and live music was provided, getting everyone up dancing and enjoying the fun. The atmosphere was terrific and further improved when the prizes of Champagne and chocolates were presented!

Everyone agreed that this had been a truly marvellous Christmas celebration week for the CCC of A and all look forward to resuming the fun when Club events restart in January.  More of that in our next issue.

Merry Christmas to all,
Ian Giles