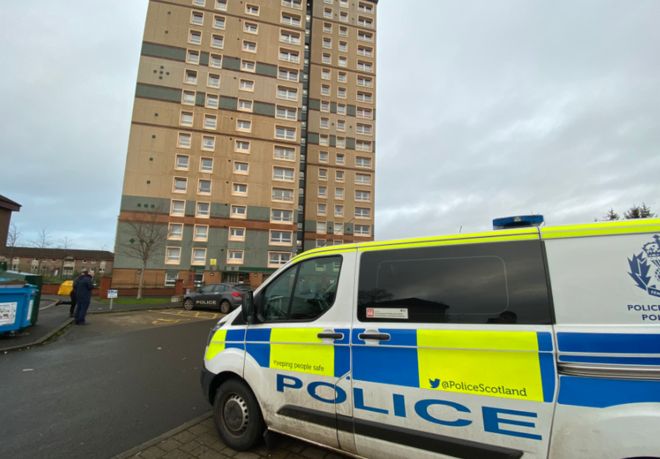 A controlled explosion took place this morning after the discovery of a suspicious package at Glen Tower in Motherwell. Credit: Jamie Simpson.

A CONTROLLED explosion has been carried out near a polling station in North Lanarkshire, Scotland, after a suspicious device was found.

Police said a “non-viable device” was found on the ground floor of Glen Tower flats in Motherwell at around 1am this morning (December 12). Residents inside the building and in the surrounding area were evacuated as a precaution with specialist staff from the Explosive Ordnance Device being deployed to the scene.

A community room in the building had been due to be used as a polling station for voters in the area. However, in light of the incident, the police said all those registered to vote in the tower to go to Knowetop Primary School instead.

“Officers responded to reports of a suspicious device on the ground floor of Glen Tower flats, Motherwell around 1 am on Thursday, December 12.

“A cordon was placed around the building and residents within the cordon were evacuated for safety reasons. Police liaised with Explosive Ordnance Device staff to examine the item and a controlled explosion was carried out as a precaution. It was found to be a non-viable device.

“The evacuation of residents within the cordon has now ended and police are working with North Lanarkshire Council to return people to their homes.

“Enquiries are ongoing and we are keen to talk to anyone that may have seen anyone acting suspiciously in the area around 12 and 1 am this morning.

Looks out the window of the building where I live and there’s a “bomb disposal truck” Down below, and it’s also the polling station for the general election. Not sure if there’s a connection #generalerection #bombdisposal #glentower #Motherwell pic.twitter.com/6dzo0RvaiS

As Euro Weekly News understands, inquiries by the police are ongoing to try to establish the full circumstances surrounding the incident. Officers have also remained at the scene this morning.

The news came hours before voters descended to the polls for the country’s third general election in less than 5 years. Polling stations in 650 constituencies across England, Wales, Scotland and Northern Ireland opened at 7am.

After the polls close at 10pm tonight, counting will begin straight away with most results expected to be announced in the early hours of Friday morning (December 13).