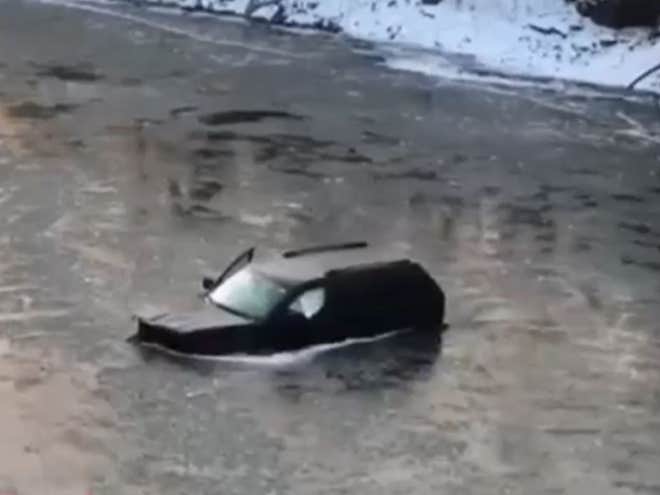 The car had plunged into the Winnebago river

Teens life saved when he called out for Siri to help

CHARLES CITY, Iowa USA – Gael Salcedo, 18, was on his way to college when he hit a patch of ice on the road and plunged into the icy Winnebago River. “I turned to the right and from there, everything just went blurry.  I didn’t know where I was going and then I just didn’t know what to do.  I was just thinking in my head ‘I think I’m going to die,'” he said. Once he realized the was in the river, He quickly rolled down the window, afraid his Jeep might sink.  Salcedo then reached out for help with a little bit of modern technology.

He said, “I lost my phone and since I couldn’t find it, I was like ‘Hey Siri, call 911.’  And once Siri called, that’s when I found my phone finally.” Firefighters from Mason City arrived quickly.  They approached the water-logged Jeep from the passenger side, because the river current was pinning the driver’s side door shut.  As that was happening, the water was rapidly rising.

“[I] basically explained to him that there’s no other way.  You’re going to have to walk out.  I’ll be right there with you holding on every step of the way,” said Lieutenant Craig Warner with the Mason City Fire Department. Salcedo’s wet walk through the bitter cold river felt every bit as bad as you’d imagine.

“My hands were freezing.  I couldn’t feel my legs anymore, so I was struggling a lot and the water was just so strong, so I kept tripping and I had the guy help me up a bunch of times and I used all my strength to get out of the water,” he said. Salcedo had to helped into the ambulance and was taken to Mercy One Hospital North Iowa where he was treated for shock. Salcedo was released from the hospital only three hours later.