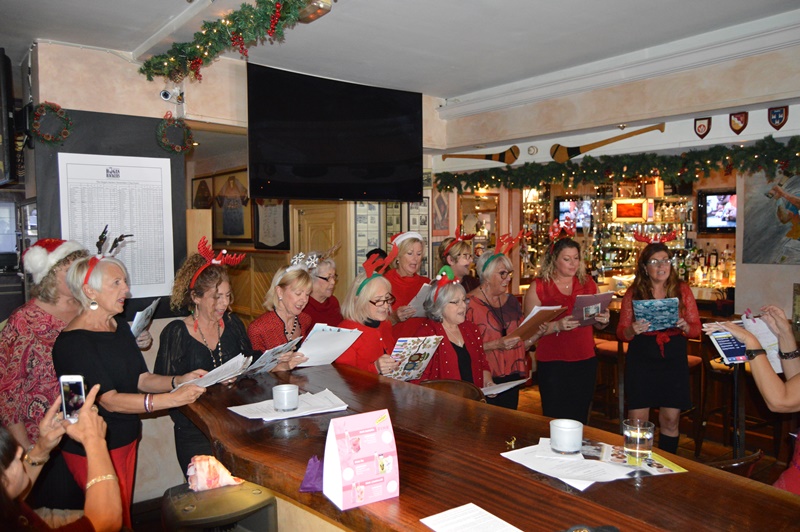 MORE than 90 people, a combination of supporters and clients, attended the Age Concern Marbella and San Pedro Christmas Lunch at the Hogan Stand restaurant on Tuesday December 12.

This is a relatively new branch of the charity which has only been in operation for three years yet has grown in size incredibly quickly and at the first event they held just 40 people turned up.

Apart from the chance for so many people to get together to enjoy a meal and a chat, there was entertainment from Karen Danzig’s Del Sol Singers which saw an appearance by new member, EWN columnist Nicole King.

There was a fundraising raffle and an auction which included a special Christmas hamper donated by Euro Weekly News which helped to raise funds for the continued running of the charity.

Special thanks were given to Lynda Woodin who organised the lunch and husband James who conducted the auction by President Tom Burns who explained the role of Age Concern.

Currently, they hold monthly get togethers at the Real Club Padel Marbella (behind the Sisu Hotel) on the first Thursday of each month, but that is about to expand with weekly meetings at a new venue in La Campana to be announced.

The group was created to offer help, advice and companionship for elderly people, many of whom are now alone and they are always looking for both clients and volunteers so if you fall into either category, simply telephone 689 355 198 between 10am and 4pm Monday to Friday.

Alternatively, visit their new office at Calle Bilbao No 3, San Pedro Alcantara which is manned from 11am to 1pm on Monday, Wednesday and Friday, email [email protected] or go online to https://ageconcernmarbella.com.