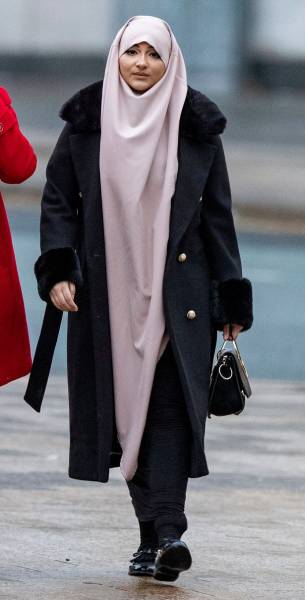 Amaani Noor, 21, married a jihadi fighter online and told him it was “her dream” to join him in war-torn Syria. Noor, of Cinema Drive in Wavertree, was arrested after sending $45.51 to a PayPal account linked to the Islamist group, The Merciful Hands, on May 23, 2018. She denied knowing or believing that the money may be used for the purposes of terrorism, and pleaded not guilty to one count of funding terrorism. But a jury at Liverpool Crown Court heard Noor had expressed her support for “violent jihad” and Islamic State terrorists via the encrypted instant messaging service Telegram. During the trial the court heard how Noor focused on religion after splitting with a Liverpool footballer, she once dated Liverpool winger Sheyi Ojo, who is currently on loan at Rangers.

The jury heard Noor had been introduced to Merciful Hands by 28-year-old Victoria Webster, of Nelson in East Lancashire, who earlier this year pleaded guilty to funding terrorism. Webster sent a message to Noor on the day the money was sent, suggesting “we must help” the family of a foreign fighter who had fallen on hard times. The message said: “The father is a frontliner, and due to his circumstances and debts it’s hard to keep food on the table.” Diana Wilson, prosecuting, told the jury that only a minute after sending the money Noor messaged Webster, saying: “So will it go to a brother who is a fighter or ex fighter and has a family?.”

She said: “The Crown in this case say that Amaani Noor knew or had reasonable cause to suspect that the money would or may be used to support people fighting against the Syrian government for a political, religious or an ideological cause. “The Crown say this because of her extensive messages showing interest in and support for extremist organisations, the fact that her husband is an Islamist Syrian fighter, her support for Sharia law, the context with her other messages including the messages she has viewed on the Merciful Hands channel, the way the money was sent and the fact that immediately after sending the money she sent a message asking if the money will go to a fighter or ex-fighter.

“It is clear from the context that she did not think she was giving money to support Syrian government forces.” A deleted email recovered from Noor’s phone, sent to her fighter husband, described her fears and thoughts about her “dream” of joining him in Syria. It said: “I don’t know what I’d do if I lost you. In a foreign land alone with no support no family, disowned by my country. Maybe enough money to last me a year or two but then what, I’m going to be some charity case being shared around telegram, there’s no way I can live like that. “I hate talking like this cause its like ERM amaani girl you should’ve thought about all this before, and I did trust me, I knew what I was getting myself into”.

“It’s been my dream to marry a fighter for a long time and my dream to be a fighter myself even longer lol, so I don’t know why I’m feeling like this maybe my imaans just low atm I am on my period so maybe I’m just over emotional n over thinking lol I don’t know tbh my heads just all over the place.” Ms Wilson said IS propaganda videos, several depicting terrorist fighters torturing, executing and beheading victims, were found on her phone.

The Jury rejected her statement

Noor   told the jury she had been planning to go and join Hakim in Syria, where he said he was an independent fighter, and as their marriage continued she “wanted to be with him more”. On the day police searched Noor’s home in Wavertree, in July last year, she had flights booked to Turkey, the jury was told. The former performing arts student, who had a Youtube channel, said now her marriage to Hakim had ended she felt it was “stupid”, “bad” and “wrong”. She added: “I don’t feel proud or happy about it.” Jenny Hopkins, from the CPS, said: “Amaani Noor and Victoria Webster knew or should have known that their donations may have been used to buy weapons and supplies for terrorists in Syria.  “The jury rejected Noor’s explanation that she only intended the money to be used for humanitarian aid.

“If she genuinely wanted to help those in need there were many reputable groups she could have used but that was never her goal.”

Sentencing was adjourned after David Gottlieb, defending, asked for a pre-sentence report to be prepared.