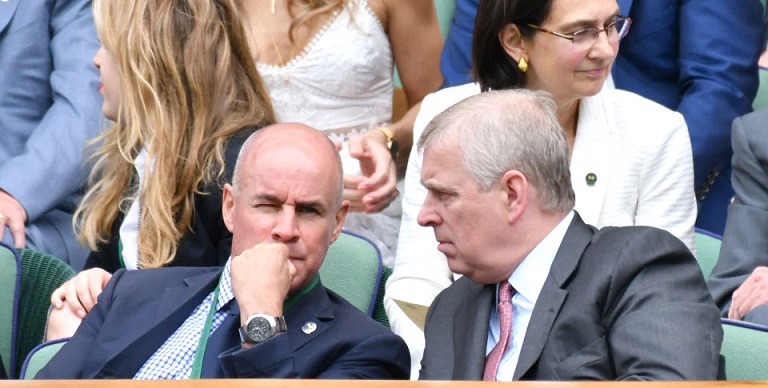 Johan Eliasch with Prince Andrew at Wimbledon in 2016

Naples Gold and the intriguing story of ‘Andrew Inverness’

Prince Andrew used a pseudonym to set up a secret firm with a sports tycoon who organised a 2001 Thailand trip during which Duke was spotted on a yacht with topless women. Prince Andrew is a ‘t**s and bums man’ who is prone to making spectacularly inappropriate comments about women, a former acquaintance has claimed. The source said Andrew often breached the bounds of social acceptance with his remarks – including one that left a pregnant woman ‘ashen-faced’ with shock. Historic pictures of the Prince have begun to re-emerge showing him surrounded by topless women in tiny bikinis enjoying an end-of-year holiday back in 2001.

According to reports at the time, the billionaire had generously agreed to foot at least some of the bill for Andrew’s stay at the Amanpuri Hotel, an ultra-opulent establishment where villas cost up to £25,000 a night. During the stay, the playboy antics of ‘Air Miles Andy’ sparked a predictable media rumpus. In particular, pictures of the Queen’s portly second son being massaged with sun-cream by skinny young women led to speculation that — aged 40 and having just left the Navy — the father-of-two was suffering from a royal version of mid-life crisis. His friends Jeffrey Epstein and Ghislaine Maxwell (The whereabouts of Maxwell has been a mystery since 66-year-old Epstein died in his jail cell in August while awaiting trial on a slew of sex trafficking charges) were also reported to be in Phuket at the time.

In normal circumstances, the business affairs of a senior royal are widely reported. Yet Naples Gold has never once been the subject of scrutiny. The firm was incorporated in November 2002, with both men joining as directors shortly afterwards. It has filed paperwork ever since, including a recent set of accounts (showing no trading activity) submitted to Companies House earlier this week. It seems that everyone involved in the creation of Naples Gold has, over the past 17 years, taken steps to keep its royal links secret. The pseudonym — his real name is Andrew Mountbatten-Windsor — seems to be derived from one of his less well-known titles, the Earl of Inverness.