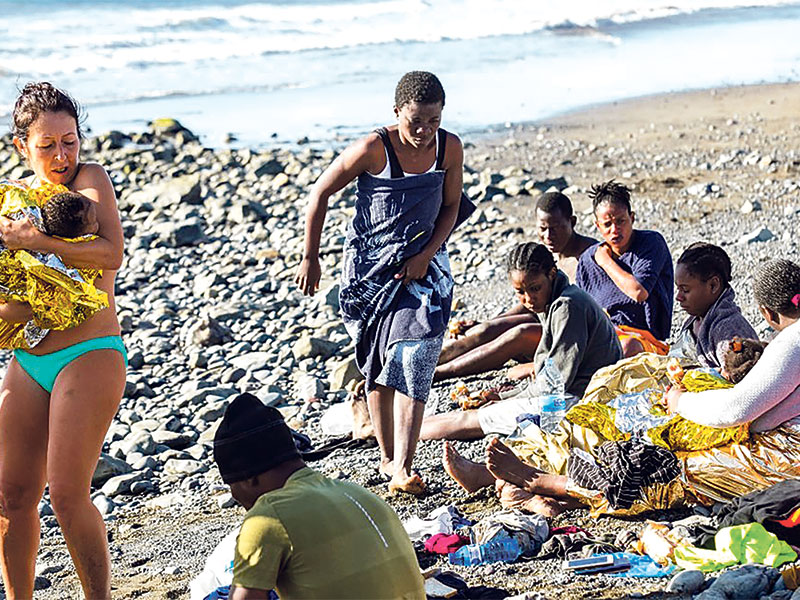 AFRICANS ARRIVE: People on the beach ran and swam out to help.

Christmas has crept up on us again. The festive season has been sneaked forward, in the hope that a twinkle of tinsel and a snatch of the ‘Away in a Manger /Silent Night’ loop will drive us all into a spending frenzy. Hold firm!

The small island of La Gomera, where we’ve taken root, was Christmas consumer nonsense free until recently. The snowball’s rolling now though. Reindeers, Christmas trees, the Coca Cola Father Christmas; you name it, we’ve got it all twinkling at us from late November onwards.

Canarian Christmas before was family dinner on the 24th, midnight mass and a day off work on the 25th. Presents weren’t given until Reyes on January 6 and it was Baltasar, Melchor and Gaspar who brought them. Father Christmas didn’t feature then, but he’s extended his flight path to include us and we must spend accordingly.

It makes for a long festive season, tough on both pocket and liver. While the UK’s undecorating on 12th night (6/1), we’re lurching into party mode, with our little church across the valley scene of an excellent three-day bash, involving a danced procession with songs, local drums and castanets.

The priest, dancers, musicians and crowd dance up and across the valley, over a water course and up steep steps to the small Los Reyes church and its square. It’s the oldest church in the valley, hidden behind a cliff face so that passing pirates didn’t see and plunder it.

Small kioscos and their wares are winched up a few days beforehand, as is the sound equipment. The instruments for the salsa, merengue and cumbia ‘orquestas’ who’ll keep everyone dancing are winched up later.

We eat ñames (yams) and kid wth hot mojo sauce, drink local wine, do loads of talking and dancing till very late, then brave the steps down. The few incidents of plummeting drunks generally end well. Falling from the Plaza de Los Reyes may be more likely when drunk, but is probably survivable, I’ve observed.

Canarian traditions are alive and well and there’ll be similar celebrations on all islands.

Meanwhile, in the midst of the pre-Christmas hype, Africans arrive in pateras. There’s a 20 per cent increase this year in these small, inadequate boats, whose owners charge exorbitant prices to desperate people.

Twenty-four unfortunates, (three children, three babies and 10 men and eight women), arrived exhausted off the Gran Canaria coast yesterday while everyone there was enjoying a 27º Canarian December beach day. They struggled off the small boat into the water, watched by astonished beachgoers.

What happened next reflects the real Christmas message. Forget glitter and pointless acquisition. People on the beach ran and swam out to help.

They took the weak and the babies, helped everyone, to shore; wrapped them in their clothes and beach towels; some ran to a nearby supermarket to buy milk and bottles for the babies and food and drink for the rest; fed them, wept and stayed with them until (and after) the authorities arrived.

So… Merry Christmas, Peace and Goodwill to everyone!