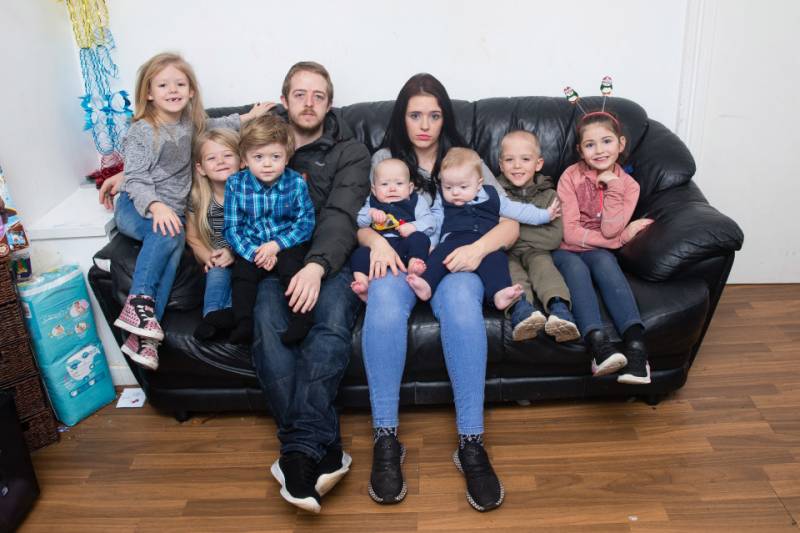 The couple raised more than £3,000 for their seven children ahead of Christmas:Credit Twitter

Ms Grimes has been forced to defend her partner after her own family branded him an “alcoholic”.

Ryan Rodgers, 26, and Jenny Grimes, 25, from Liverpool, made an emotive plea for help after their Universal Credit payment was slashed, leaving them with just £480 a month to live on. The couple say they are forced to rely on food banks, charities and help from pals and relatives to feed their kids, who are all under seven years old. Writing on the crowdfunder web-site, GoFundMe, Ms Grimes said they were “ashamed” to ask for help but were facing a tough struggle ahead of Christmas.

“I hate to have to do this and it’s took a lot for me to actually do it, but there is only so much we can do as a family,” she said. “Any help at all is very much appreciated, even if you could point me in the direction of getting some help. Thank you.”

But furious neighbours have taken issue with the family’s desperate plea, saying it is undeserved. Retired Joan Bennett commented: “If anyone does give them money I know where it will be going – cannabis.” The smell of pot used to be out there first thing in the morning. In the summer I’d be hanging out my washing and screaming, ‘Will you stop smoking that stuff and get a bloody job?”

Another neighbour added: “He [Ryan] was smoking pot all day long – starting at seven in the morning sometimes and carrying on until late at night. “He was an absolute disgrace. Anyone who has given them money for presents needs to know it is more likely to go on buying gear. They’ve had handouts all their life – it’s time they started paying their way like anyone else.”

The family-of-nine – Ellie, seven, six-year-old twins Kenzie and Kelsie, Laysie, four, Archie, two and two twin boys, Tobie and Rylie, aged seven months – live in a three-bedroom home, which costs £675 a month in rent. Mr Rodgers used to work as a waiter, but has been washing cars to pay their electricity bills. The couple said their children “wanted for nothing” until Mr Rodgers lost his job over a health scare last year.

Mr Rodgers says he suffers from depression and anxiety and became an alcoholic, but has now beaten the booze. But his mother-in-law, Ms Grattan said: “Ryan is a feckless liar who is trying to con the public into giving him money which he will just pour down his throat.”No one should give him any money as he has a drink problem and that’s where it will all go. He will spend it all on booze. “Anyone who has donated to the GoFundMe page should ask for their money back. He is conning the public with a sob story that is not true.”