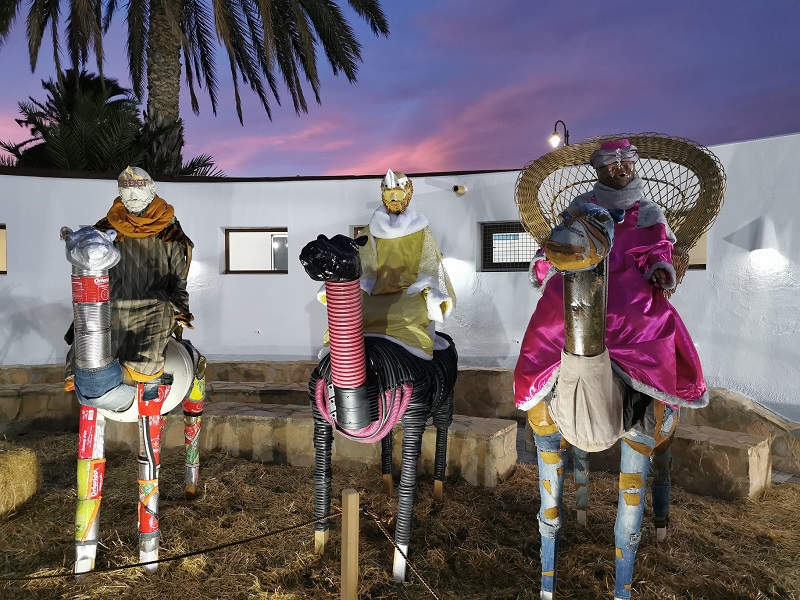 VERA is thinking about the environment as well as Christmas traditions this festive season with a municipal nativity scene made from recycled materials.
The installation in the town’s Cuatro Caño square features an entrance constructed almost entirely from agricultural residues, a roof formed by old hose pipes, flooring made with fertilizer canisters and a wheelbarrow turned into a cradle. Old clothes and curtains were used for the figures’ costumes.
Other materials used to create the nativity include tyres, cardboard, newspaper, magazines, tetra packs, tins and bits and pieces picked up from beaches.
Vera Trade and Consumer councillor Ana Lourdes Ramirez said the main aim of the bio-construction initiative was to motivate residents to try and produce less waste and to recycle.
“This Christmas the council wants to preach to residents by example on the responsible consumption of resources, which is not buy, throwaway, buy, but rather with creativity, dedication and care you can use natural resources with respect, recycling, reusing, and reducing consumption, and of course enjoy socially and culturally, as is the case with our Christmas nativity.”
Monica Motos, who oversaw the construction of the installation, described the initiative as “a socio-cultural, resident participation project, with an enriching group of people, among them adult women, middle-aged men, teenagers and children, each one contributing their best skills and qualities in a healthy environment.”
It was, she added, “an area of social recreation, education and environmental awareness-raising, which continually shows that waste can be recycled and transformed into art through responsible use.”
Vera local authority said it was working on the basis of objectives set out in the Andalucia 2010-2019 Territorial Management Plan on Non-Dangerous Waste Management, which brings together socio-economic development with the conservation of the environment as established by the European Union, “and necessary so that future generations enjoy a healthy environment.”