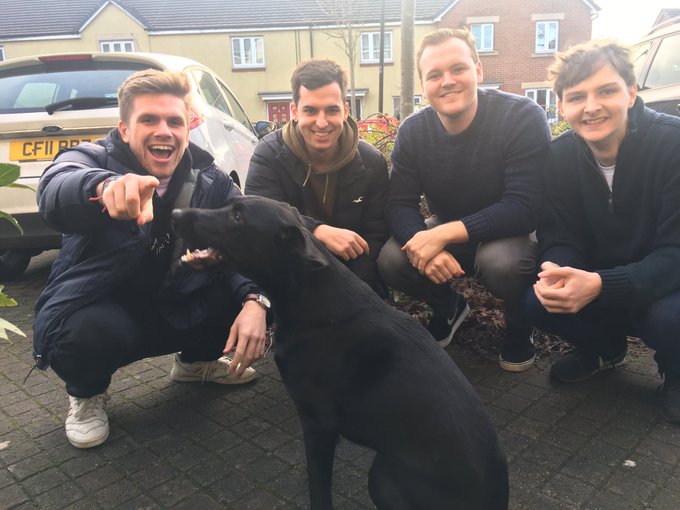 FOUR young engineers, who have been living in the same house for approximately four months, and who were denied by their landlord to have pets on the premises turned to neighbours for help after they found themselves struggling to adapt to life without a pet – after each grew up in a household full of animals.

The young men were thrilled when a kindly neighbour responded, posting them a letter addressed to ‘the boys’ from their pooch asking if they’d like to go for a walk – the letter was sealed with a paw print.

Sharing a photograph of their original letter alongside the response from their neighbour, written as if directly sent from their hound, Stevie-Ticks, has gone viral on Twitter

Been saying we’d love a dog about the house but our landlord doesn’t allow pets, so my housemate posted a letter to our neighbours asking if we could walk their dog every once and a while and the response was better than we could have ever hoped for pic.twitter.com/dcMOfPk5UH

Their original letter read: “Dear neighbour, We are four engineers that have recently moved into the area in the past three to four months. Our house is compromised of an Englishman, two Scots and a Welshman. Diversity.

‘The other day, we noticed a four-legged friend looking at us out the window when we arrived home from work. He or she looked like the good-est boy/girl there is. If you ever need someone to walk him/her we will gladly do so.

‘If you ever get bored (we know you never will, but we can dream) we are more than happy to look after him/her. If you want to come over and bring him/her to brighten up our day, you are more than welcome.

‘If you want to walk past our balcony windows so we can see him/her, please do. We hope this doesn’t come too strong, but our landlord won’t allow pets and we’ve all grown up with animals. The adult life is a struggle without.”

The reply from the pooch was just as ingenious and reads:

“What a treat it was to receive your letter! On the subject of treats, I like them a LOT. Big ones and meaty ones and cheesy ones… oh sorry… where was I?

I am two years and four months old, and I am a sheprador (Lab x GSD) I come from Cyprus originally but Chris and Sarah rescued me from a cage in the “doggy hotel.”…

The letters continues and is signed off in the following comical way:

“I must warn you that the price of my friendship is 5 x ball throws a day and belly scratches whenever I demand them.

I’d love to hang out whenever you fancy. Give my servant Chris a whatsapp and we can arrange a meet up!”

The interaction has received over 100,000 re-tweets, as many praised that more people should offer dog walking.

‘Lovely, wouldn’t it be nice if more people did this, maybe help out an elderly neighbour who has a dog who would like more walks than they are getting, or faster or more ball throwing, football,’ wrote one.

Stevie-Ticks’ now have almost 5,000 followers on an Instagram dedicated to sharing her adventures.