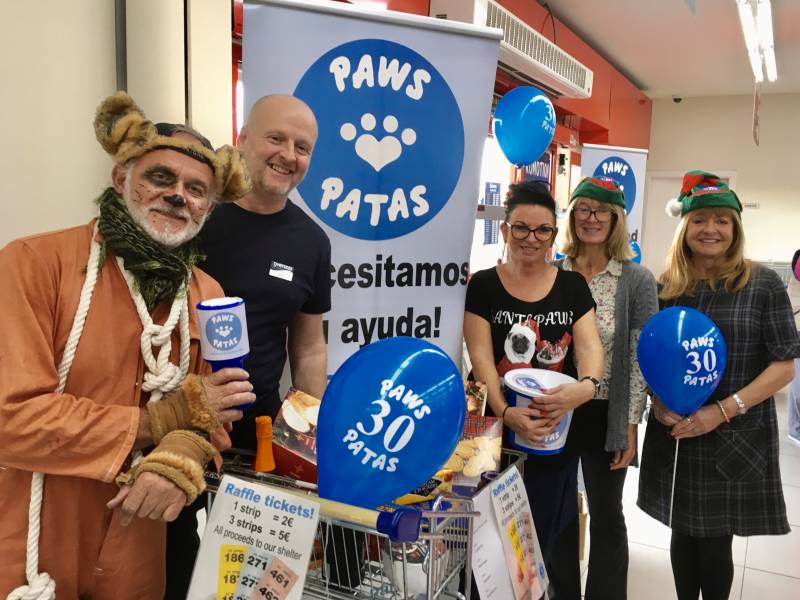 PAWS-PATAS has received a big boost to its funds from this Saturday’s Iceland (Overseas) stores Vera branch fundraiser for the animal charity.
PAWS-PATAS volunteers spent the day packing customers’ shopping and manning the raffle stall, for which Overseas Supermarkets provided the prizes.
Dogs looking for their ‘forever homes’ were walked outside and the Sue Moretta choir provided the entertainment.
PAWS-PATAS executive committee member Chrissie Cremore described the atmosphere as “buzzing”, on what was one of the biggest shopping days of the year.
The day ended on a high note as the generous customers’ donations to the collection tins, raffle and choir were totted up, the grand amount raised €518.
This money, alongside €870 collected for ticket sales for a performance by the Incognito Choir on December 6, plus a further €901 from Shoestring Productions’ recent variety shows and raffles brought in an impressive total of €2,289.
“This is an amazing amount for PAWS-PATAS because the charity needs €9,500 each month in order to cover vets’ bills, food, electricity, water and other general running costs”, Chrissie told the Euro Weekly News.
Chrissie reported that 2019 has been another tough year for the animal charity. The PAWS-PATAS shelter located between Los Gallardos and Turre took in 357 dogs during 2019, and 148 kittens were abandoned at the gates. Sadly 22 died of Panleukopenia.
The “heartening news” is that 256 dogs have been adopted in Spain, Holland, the UK, Germany and Belgium and 91 kittens and cats have been homed and 130 neutered.
The next big annual PAWS-PATAS event to raise much needed funds is the New Year’s Day swim in Mojacar Playa, organised by Ann and Brad Swift. The daring winter dip will be at 11.30am in front of the Best Indalo Hotel.
PAWS-PATAS call on volunteers to ”be brave” and help the animal charity reach its target so it can build a vital quarantine unit at the shelter.
“Unfortunately, when infected puppies are dumped at the gates we have been forced to close the shelter because parvovirus is an incredibly contagious disease with devastating symptoms”, Chrissie explained.
“The quarantine unit will help prevent a total ‘lock down’, which of course is very distressing for the animals and the volunteers which the public are often not aware of.”
For further information regarding volunteer work for PAWS-PATAS, including helping in the animal charity’s outlets, at the shelter, fundraising or donating, see the website: www.paws-patas.org or email: [email protected]