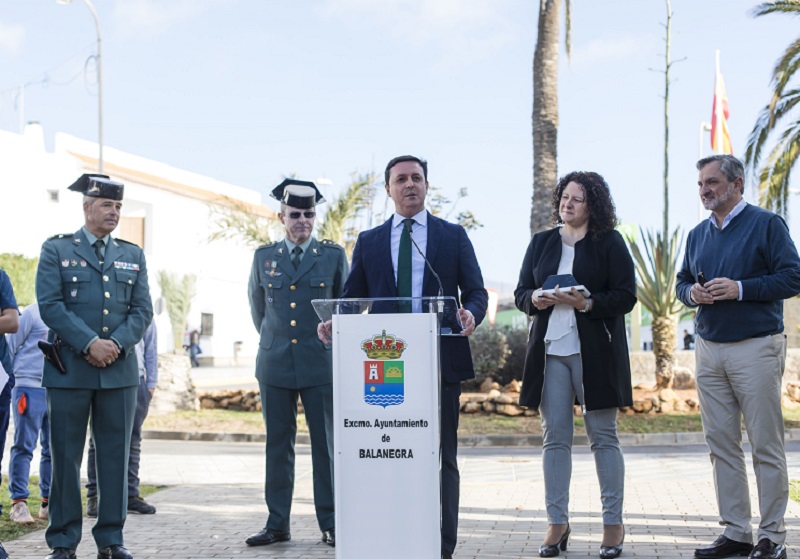 THANKS: The square honours the men and women making up the Almeria force for their work throughout the province. CREDIT: Diputacion de Almeria

BALANEGRA has dedicated its main plaza to the Guardia Civil with a moving ceremony on Sunday attended by provincial dignitaries and local residents.
Diputacion de Almeria president Javier A. Garcia praised the municipality for honouring the force in this way.
Garcia described the people of Balanegra as “hospitable and welcoming”, which was reflected in the decision to dedicate the town’s most central point to the security force.
“This place as always been very special. It is the epicentre of the municipality and from today it is also a place which will always recall and give thanks for the job the Guardia Civil does, not only in this town but throughout the province”, the Diputacion head told the audience.
“Dedicating this plaza to the men and women who make up this institution is a way of expressing what for us represents the Guardia Civil’s great work and approachibility”, commented Balanegra Mayor Nuria Rodriguez.
“For their devotion and for contributing to peace and the defence of all our residents, we want this place to carry the name of the Guardia Civil forever.”
Almeria Guardia Civil colonel-in-chief Arturo Prieto expressed his gratitude for the move in the name of the 1,700 officers forming the Guardia Civil in Almeria.
“For an institution which has existed for 175 years, it is an honour to have the affection of residents”, he said.
“Our aim is to serve the citizenship, and for them to respond in this way is undoubtedly a privilege.”
As a mark of the Guardia’s appreciation of Balanegra’s gesture, the colonel-in-chief presented the mayor with a marble version of the force’s distinctive three-cornered hat.
Also to mark the occasion, members of the public were treated to displays by the Guardia’s different units, among them the canine drug and explosives detection service.