ENGLISH NEWS: Desperate man without food or electricity given more than £11,500 by strangers 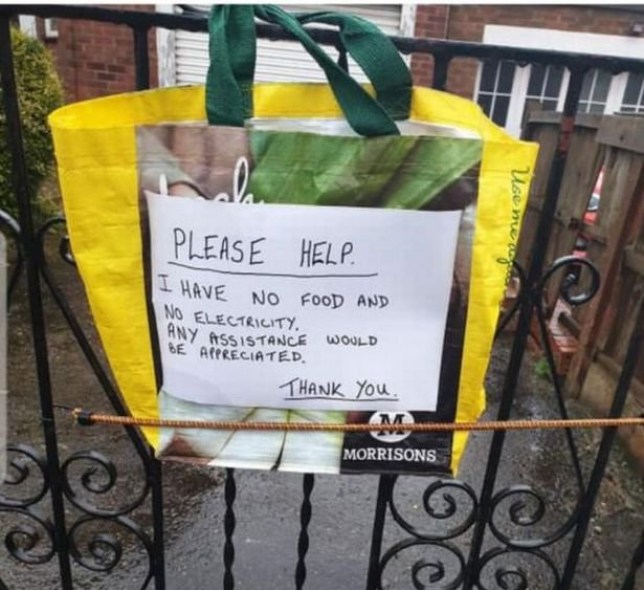 A resident named William left a note outside his house asking for help. Credit: Facebook.

WELL-WISHERS have donated more than £11,500 to a fund set up to help a man who said that he had no food or electricity.

The 59-year-old from Nottingham, England, known only as William, put a note on his garden gate outside his home in Carlton hoping a passer-by would be able to help.

Within hours of his cry for help, William received food from Clifton food bank and his heating and lights were put back on.

After revealing that his last “proper” meal was jam sandwiches, locals pledged to bring him more food and resident Jenny Connell offered to drop him off a hot dinner a few times a week.

Amongst the donations was £1 from an anonymous single working mum who posted: “Sorry it’s not a lot. In thousands of debt myself but what’s an extra £1! Merry Christmas  x.”

One child donated their pocket money, another well-wisher gave £1 even though they were still paying off their son’s funeral, and another donated £1.78, with the message: “I can only apologise this is all I have in my bank account, we all fall on hard times including myself at the moment but we all need to help each other.”

A Facebook page called ‘Send William A Christmas Card & Help Him!’ has also been created, with one thoughtful 11-year-old girl named Savannah writing:

“I am so sorry you have to live like this but we are going to try and help you soooo much. I am so glad to help you. My sister had bought some stuff to try and make you feel better.”

Businessman Craig Crawford, who set up the fund for William, said that it was heart breaking but at the same time heart warming to see people give their their last penny to help the man. He added that he was proud of his community to pull together to do all they could to support someone in need.

William, who lives alone in the house following the death of his mother, had been selling off furniture and games in garage sales to get by until recently.

Adult social care has been contacted in a bid to help him claim benefits, where it is believed that he had too much pride to claim, saying others were in greater need. He may also be able to claim financial support via Boots benevolent fund as a former employee.

However, it’s not just the money which has been a concern but his loneliness too and since the story has gone viral a cousin has been in touch and is planning a visit.

As Euro Weekly News understands, the money will be used to help William, with some being set aside to help others in desperate need.