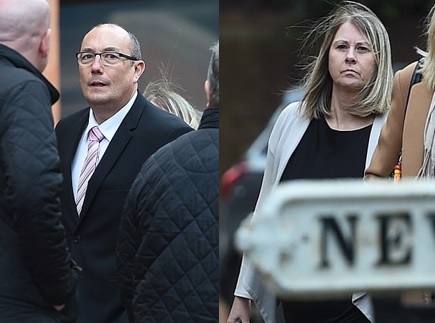 Paul and Samantha Harrison made more than £200,000 in stamp fraud

Married couple funded lavish lifestyle by washing 700,000 used stamps then selling them as if new on Amazon and eBay in elaborate £225,000 fraud

Paul Harrison and his wife Samantha defrauded the Royal Mail out of more than £400,000 as they duped customers into buying stamps on Amazon and eBay. The pair used the proceeds from their fraud to pay for luxury holidays and a BMW with personalised number plates. Paul Harrison was involved in the sale of around 700,000 stamps which resulted in Royal Mail losing £421,000. Just over £215,000 had gone into an account held by the Harrisons while their accomplice Graham Rought netted £43,000 and caused a loss to Royal Mail of £113,000. The 52-year-old, from Barnsley, was jailed for four years at Birmingham Crown Court.

How they Used chemicals to wash stamps then sell them on…

Washing stamps involves using chemicals to remove the cancellation marks put on them by Royal Mail to show they have already been used. This is done by using white spirit to remove the glue from the back of stamps before drying them out with talcum powder. Fraudsters then spray them with hairspray to make them look newer. Ben Close, prosecuting, told the court the trio bought large quantities of second hand stamps through the postage system, removed from envelopes, and sold them on so they could be reused.

He added: ‘Paul Harrison accepts he put them on grease proof paper to make them appear as if new. ‘Rought was involved in washing off the franking marks.’ He said Paul Harrison had run an account called Affordable Stamps since June 2007. Stamps were bought by Harrison in kiloware and traded on Amazon and eBay. Rought had been involved in the fraud for two and half years.

An investigation was launched in 2015 when a large quantity of envelopes were rejected at a sorting office in Glasgow. Tests showed there were no signs of phosphor on the stamps, which were mainly addressed to schools in Scotland, and they were traced back to the Harrisons. He said when their home was searched evidence was found of the process.

‘The fraud took place over a period of just short of nine years. You made considerable gain from these offences.’  Katie Rafter, for Samantha Harrison, said she had ‘turned a blind eye to her husband’s activities’ but must have had suspicions about them.

Graham Rought, from Tile Cross in Birmingham, had previously admitted adapting, supplying and possessing articles for fraud and money laundering. The former dental technician was handed an 18 month sentence, suspended for 18 months, and ordered to do 85 hours unpaid work

Pic : Paul and Samantha Harrison made more than £200,000 in stamp fraud