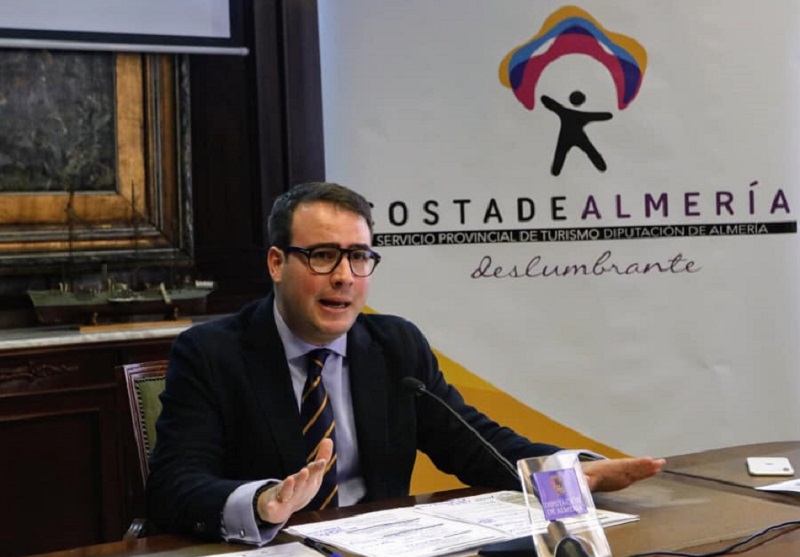 THE Costa de Almeria tourist sector has had another excellent year, according to provincial Tourism delegate Fernando Gimenez.
“Our province has managed to become a fashionable destination and to maintain its attraction in a sustained way”, the delegate remarked at a press conference to talk about the tourism sector results for 2019 and the provincial tourist board’s promotional activities over the last 12 months.
“Exceeding one million tourists and the five million overnight stays was not a one-off success, as there have now been three consecutive years of registering the best results”, Gimenez commented.
He made it clear the provincial Tourism department was not resting on its laurels however, adding, “We are going to continue working so that tourists come to our province and do so throughout the year and throughout Almerian territory.
“Our position is to develop a varied and diverse tourism model, but also one of quality and which is sustainable, based on resources which do not exist in all the European continent.”
Gimenez maintained national tourism has grown by 42 per cent and international tourism by 290 per cent since the current government team came into office.
He referred specifically to positive points like an increase in international flight connections in recent years, having among the longest average visitor in the country and to positive tourist feedback on the Costa Almeria destination.
He also talked about job creation within the provincial tourism sector since 2011, today totalling some 28,000 posts he said.
In terms of Diputacion de Almeria tourism promotion activities this year, the delegate highlighted measures put in place to address the fallout from the collapse of Thomas Cook.
He said the Co-Marketing plan had been specifically designed to reinforce the arrival of British tourists.
“The British market is very important for our province”, he stressed, explaining the administration had “allied” with another tour operator to increase connections with the UK to guarantee the British keep coming to Almeria.
The delegate talked too about the launch of a direct flight between Milan and Almeria, saying it had encouraged the arrival of more than 20,000 Italian tourists, referring also to the Diputacion’s efforts to make greater inroads into the French visitor market.
He mentioned as well the more than 100 travel fairs, professional days and promotional events in which the provincial Tourism department participated in 2019, among them the World Travel Market in London.
Gimenez ended by commenting on what he said was the success of the provincial campaign to promote the Costa Almeria in European markets.
“Since we launched this initiative more than 250,000 tourists from 11 European countries have come to our province”, he said promising the Diputacion would carry on working to attract tourists from around the world, 12 months a year.