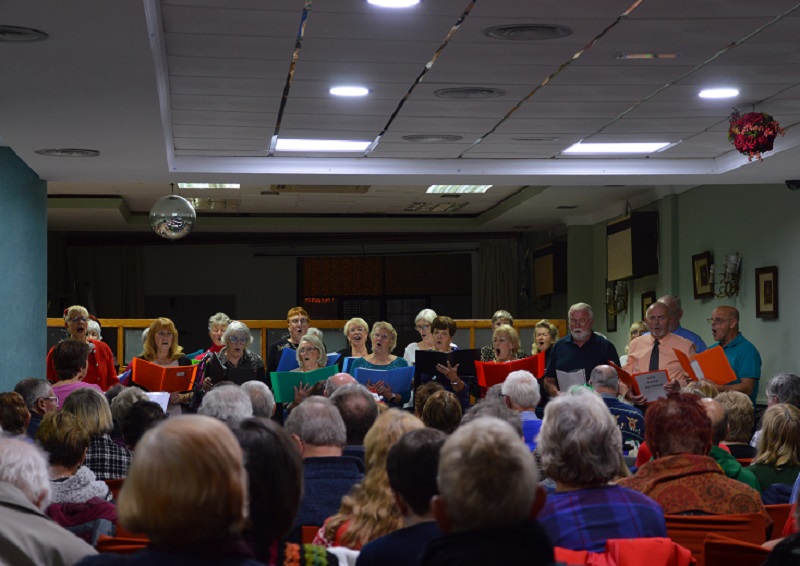 GOOD CROWD: Choir members’ concerns their concert idea had been over ambitious proved to be unfounded.

IT was with a degree of trepidation that the amateur Community choir All Aloud gathered at La Parilla Bar and restaurant in Albox for their Christmas charity concert on Friday evening.
There were several factors making members wonder whether the evening would be a success. First this is the last weekend before Christmas, and a lot of the ‘swallows’ had returned to their native lands for the holiday period.
There were also several other Christmas parties going on in the area with professional bands and singers vying for a limited audience. To add to the choir’s concerns the weather had turned cold and damp.
Early ticket sales had been steady, but not spectacular, and there was concern that the idea of the concert might have been over ambitious.
As is often the case, the worst-case fears were simply that. In the end an expectant, good-humoured paying audience of nearly 100 turned up for an evening of song, community singing, laughter and good company, comfortably filling the hall.
Entertainment came in the form of a wide variety of music, including traditional carols and folk songs from a variety of traditions. Songs in Spanish, German and, surprisingly even Latin, were also enthusiastically received.
The audience’s wholehearted and enthusiastic participation greatly enhanced the sense of enjoyment and community.
Mr Geoff Murrell kindly gave of his time and talent for a couple of numbers duetting with the choir, which went down a storm.
The evening finale was a prize draw run smoothly and efficiently by Karen Revel from the Harmony Community Support charity, the beneficiary of the funds collected from the evening’s entertainment. In the end a thoroughly entertaining couple of hours resulted in an excellent pre-Christmas feel good event which raised €670.
The choir issued a big thanks to the venue staff, who were enthusiastic and able assistants in setting up and clearing the hall, all the volunteers who assisted in setting up the event and the raffle, and especially to Donna Walker, the All Aloud’s team leader, musical maestro, compere for the evening and general inspiration.
All Aloud now go into their Christmas break and reassemble at Chapman’s bar and restaurant on Thursday January 16 at 3.30pm.
The choir welcomes anyone who likes to sing. No previous experience is necessary.