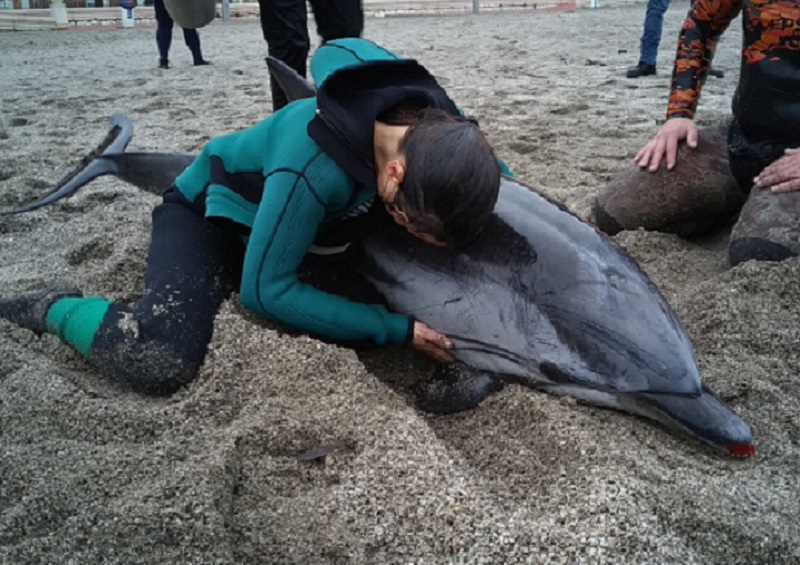 HEARTBREAKING: The marine rescue association said the fact the dolphin went into one of the volunteer’s arms clearly indicated it was very sick. CREDIT: Equinac Facebook @asociacionequinac.org

THERE was no choice but to put out of its misery a badly injured dolphin which came close to the shore just off Almeria city on Saturday.
The Equinac marine life rescue association related on Facebook that the creature had beached on playa El Zapillo, but that members of the public had put it back into the water.
The Equinac volunteers found the dolphin extremely tired and covered in injuries, and trying to beach again. A clear indication the dolphin was very sick was that it went into one of the volunteer’s arms.
“This would never happen if the animal were health and strong”, Equinac commented.
“This indicted to us that it was effectively exhausted; if this were not so a dolphin would never let you catch it, and even less come up to you to be held.”
The post reported that seeing that the animal did not have the strength to breath and was going to drown the volunteers decided to get the animal out the water, not an easy operation given its size and the rough seas and strong currents battering the coast.
Once the ailing creature was on the sand the volunteers were able to determine that the dolphin was quite elderly having lost several teeth due to old age. Its body was covered with cuts, grazes and parasites. It was also bleeding from its snout, vomiting water and foam and very short of breath.
It was at this point that the Equinac team concluded the kindest thing would be to put the dolphin to sleep “to avoid an agonizing death and greater suffering.”
Equinac issued a reminder that dolphins “are not fish, and when they beach on the sand it is because they have a serious problem and are very ill.”
If members of the public try and reintroduce a sick dolphin into the sea it means the creature will drown, hit rocks or wash up on a beach somewhere else, the association warned.
Equinac stressed dolphins are a protected species which should only by handled by personnel from an authorised entity, and that the correct course of action is to inform the authorities or institutions like Equinac.