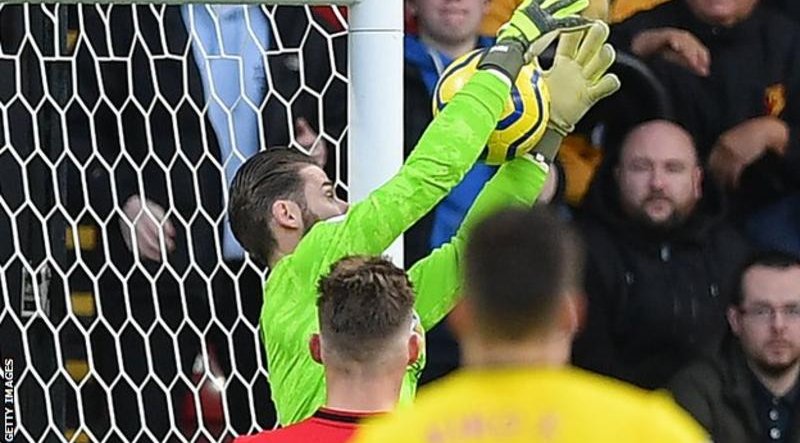 Nigel Pearson say he is “very confident” that his Watford team can avoid relegation from the Premier League after they collected just their second win of the season against Manchester United at Vicarage Road.

Watford were helped on their way courtesy of David de Gea’s error for their opening goal, with the Spanish keeper allowing Ismaila Sarr’s mishit shot to bounce through his arms and strike him in the face as it entered the net. Troy Deeney compounded a miserable day for United as he registered his first league goal since April with a penalty after Aaron Wan-Bissaka’s foul on Sarr.

Not even the introduction of Paul Pogba – returning after a near three-month absence – as a substitute could raise United, who failed to register a shot on target until the hosts were already two goals ahead. And while Ole Gunnar Solskjaer’s side did attempt to chase the game, Watford also had chances to add to their tally and deserved only their third league victory ever over United.

Solskjaer celebrated his first anniversary in charge of Manchester United on Thursday but while his first game in charge resulted in a thumping 5-1 victory at Cardiff, this performance was the polar opposite. A recurring complaint throughout the season has been United’s lack of midfield creativity and the ability play through teams in the bottom half of the table.

And this was another unimaginative and ponderous display, which was eventually punished by their resolute opponents. Manchester United manager Ole Gunnar Solskjaer admits his side were second best at Watford.

Fred and Scott McTominay both struggled to impose any rhythm from midfield while Daniel James, Jesse Lingard, and Anthony Martial failed to provide any spark in the final third. Lingard has now gone over 25 hours since his last goal or assist in the Premier League, and notably missed United’s best opportunity of the afternoon, chipping over when one-versus-one with Ben Foster with the game goalless.

And that made it easy for Watford to follow the same template used by Crystal Palace, West Ham, Newcastle, and Bournemouth in their victories over United while struggling towards the bottom of the table. United’s best performances have tended to arrive against teams where they have been able to launch quick counter-attacks, but as in their draw with Everton last week, Watford left little space in behind their back four and outworked their opponents.

Since Nigel Pearson’s appointment as Watford manager on 7 December, the Hornets have taken four points from three fixtures, with their only defeat coming against runaway leaders Liverpool.

The display at Anfield, where they were narrowly beaten, showed a level of commitment and endeavour rarely seen under former bosses Javi Gracia and Quique Sanchez Flores this season.

And this was very much a continuation of that effort, albeit against a side without the same attacking finesse as the leaders. Aided by the return to full fitness of their talismanic forward Troy Deeney, who was starting just his sixth game of the season after a knee injury, Watford made this a scrappy affair and ultimately deserved their win.

Deeney covered nearly a kilometre more than his United counterpart Martial as he made life uncomfortable for the visiting defence and that was replicated all over the pitch, with Pearson’s side running over 5km more than their opponents. That hard work was also rewarded by a level of good fortune as they scored with the first two shots on target in the game.

This victory will provide renewed hope that they can follow Burnley, Swansea, Sunderland and West Brom and survive in the Premier League having earned 12 points or fewer after 18 matches.