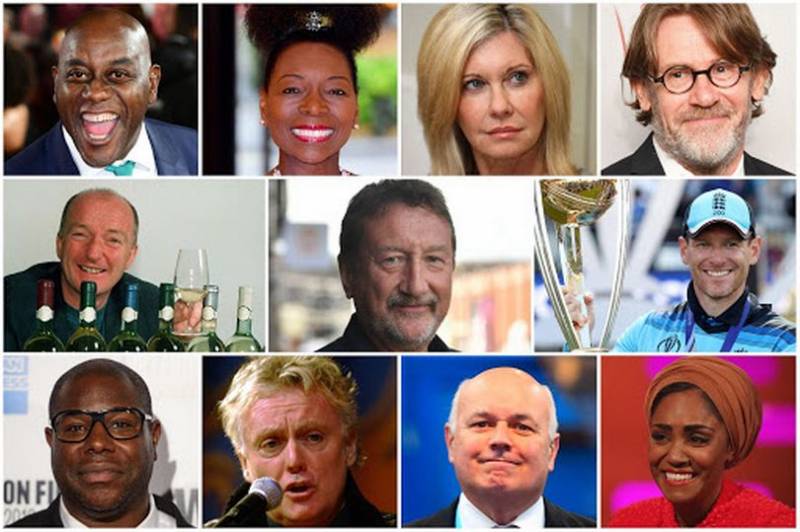 Household names from the worlds of showbiz, sport, and politics have been recognised alongside a glittering array of figures from the arts, sciences, and charity in the New Year Honours list.

British-born Australian songstress Olivia Newton-John is made a dame for services to charity, cancer research, and entertainment, while critically acclaimed director Sam Mendes gets a knighthood for his contribution to drama.

Grease star Olivier Newton-John, who moved to Australia with her family as a five-year-old, said: “I am extremely excited, honoured, and grateful beyond words to be included with such an esteemed group of women who have received this distinguished award before me.

“As a girl born in Cambridge, I am very proud of my British ancestry and so appreciative to be recognised in this way by the United Kingdom.”

Mendes, who has directed two Bond films as well as multiple international theatre productions, said he was “amazed, delighted, and extremely proud”.

Sir Elton John was awarded the Companion of Honour for a remarkable career spanning more than five decades, in which he has sold more than 300m records worldwide, and used his fame to promote the work of 23 charities, including his own Aids foundation. He becomes one of only 64 people apart from the monarch who can hold the honour at any one time.

The musician tweeted: “I’m humbled and honoured to be among such highly esteemed company in receiving the Companion of Honour. 2019 has turned out to be a truly wonderful year for me and I feel extraordinarily blessed.”

Cricket, unsurprisingly, features heavily in the sporting section of the 2020 honours after England’s first men’s Cricket World Cup victory last summer. Off the back of the triumph, 28-year-old Ben Stokes, the newly crowned BBC Sports Personality of the Year, will be given an OBE.

One-day international captain Eoin Morgan gets a CBE and teammates Root and Jos Buttler and Root are given MBEs.

Colin Graves, chairman of the England and Wales Cricket Board, is honoured with a CBE for services to the sport.

Coach Trevor Bayliss, who saw the England team through their summer triumph, gets an OBE, and Clive Lloyd, 75, a former West Indies team captain, gets his CBE upgraded to a knighthood for services to the game.

There were more Sports honours…

Entertainment is well represented, with 12 Years A Slave director Steve McQueen receiving a knighthood for services to film.

Several musicians have also made the prestigious list, including Billy Ocean, 69, born Leslie Sebastian Charles, who gets an MBE for services to music.

Snow Patrol lead singer Gary Lightbody is made an OBE for services to music and charity in Northern Ireland after he founded the Lightbody Foundation, a group which gives annual donations to charities across the country.

Peaky Blinders creator Steven Knight has been awarded a CBE in the Queen’s New Year’s Honours.

Michael Prendergast, founding member of Merseybeat group The Searchers, gets an MBE, while Peter Saville, the man behind the Joy Division album cover for Unknown Pleasures, is made a CBE for services to design.

Culinary household names Ainsley Harriott and Nadiya Hussain, who rose to fame by winning the 2015 series of The Great British Bake Off, receive MBEs, while chef and author Nigel Slater gets an OBE for services to cookery and literature.

Wine writer and broadcaster Robert “Oz” Clarke receives an OBE for services to journalism, while BBC Radio 1’s longest-serving presenter Annie Nightingale is made a CBE for services to radio after previously receiving an MBE.