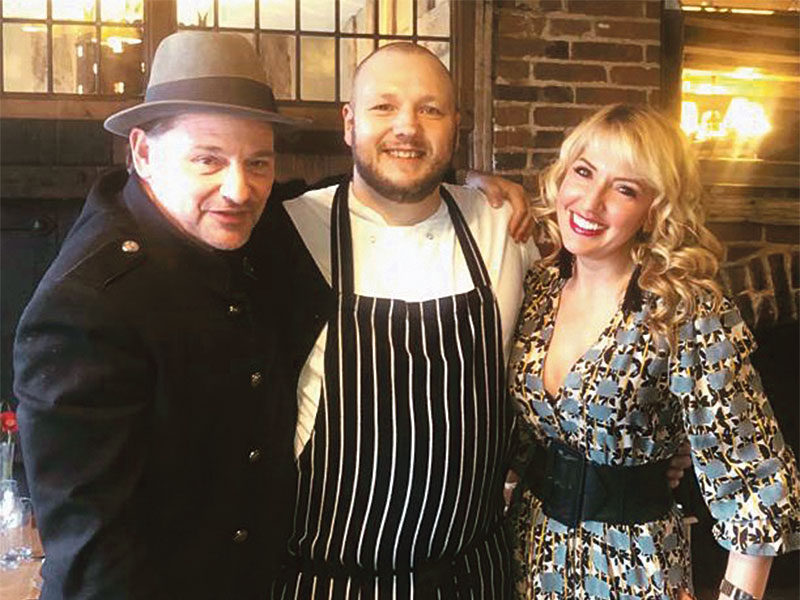 THE most beautiful things are not associated with money; they are memories and moments.

I can’t drink a bottle of Meursault wine without the memory of a special restaurant that always has a place in my heart. We all have memories and without them there is no life.

This week I am taking a trip down memory lane inspired by a recent visit to the UK when I visited my first ever restaurant where I was chef/ patron in 1981.

The White Hart at Great Yeldham is a 15th century Coaching Inn sitting amongst four acres of landscaped gardens bordered by the River Colne near Halstead in north Essex.

I was chef patron there for nearly seven years and it was my home and the first restaurant that I was ever responsible for. It has so many fond memories of Christmas with my family, my brother’s wedding and my drunken chef who we used to carry off to the staff quarters!

It also has memories of the first time I met my first wife who was a client and her mother who ran a great little pub locally which I would visit.

I also have memories of Suzi Quatro who we often entertained and she would sing and play her guitar at the table of my friend’s mansion in the next village after a few glasses of red wine.

The White Hart was a great success and where most of my inspiration and enthusiasm came to create The Geranium. Cars literally parked down the road trying to get into the restaurant, it was always packed.

The sad day that I left, the owner (Mrs Gough) who was always hostile to me came to say goodbye and as I packed things into my car boot she said “Well at least now we can start doing some real business and make some money!”

I was gutted and very hurt by her comments and that memory also stays with me forever. I had put my heart and soul into this restaurant and it was a great business filled with regular loyal clients who liked spending money (the sort of clients we love!) Many heartfelt memories were made and captured forever.

Six months after I left The White Hart it went bust! Whilst I smiled inside at this irony, I was also angry that a great business could be destroyed so quickly. It changed hands a couple of times after that and I never went back.

Nearly 40 years past and I went to visit my ex mother-in-law who is in a care home in Castle Hedingham nearby. We drove past The White Hart and so I said to Serena let’s call in for lunch. Serena said “Dad I know how you love to be recognised, but after 40 years there is no chance anyone will remember you, so be prepared!”

We had a great lunch there cooked by Chef Kevin White with a bottle of Meursault of course!

At The White Hart I often borrowed a friend’s Range Rover to collect clients so that they could relax and drink. This gave me the idea to offer a client chauffeur service at The Pink Geranium which we also now do at The Little Geranium here in La Cala.

When I bought The Pink Geranium in 1987 we also bought a Rolls Royce Silver Shadow (as you do). Clients were collected from near and far and one of our most regular was Rod Stewart who had a beautiful mansion in Epping. Rod loves a brandy or two and so we always collected him and returned him home!

I will never forget him sitting at his table discussing the World Cup of 1966 when England won. He asked for a marker pen and drew a line down the centre of the tablecloth.

The next morning my cleaner Yvonne said, “Someone had written all over one of our cloths, it has taken me all morning to get it removed!”

“Yvonne” I said, “if only you knew what you have just done!”

ROD loves lamb. I cooked it for him differently several times but the one he loved was the saddle of lamb tender and pink with a herby crust currently on the menu at The Little Geranium. Here is the recipe:

For the saffron pickle

For the crumb topping

To make the pickle

Simply sweat off the onions in a deep saucepan, add the white wine, the vinegar and the sugar and cook on a low heat until you have sticky cooked sweet and sour onions. Now add the saffron, stir in and reserve.

To make the crumb

Simply put the breadcrumbs into a food processor with all the herbs and blend until you have a bright green powdery mixture.

To cook the lamb

Firstly take the garlic and blend with the olive oil with and electric hand blender until you have a garlic puree.

Season the lamb and seal in a hot frying pan until coloured all over but not cooked.

Remove and spoon some of the garlic puree over the lamb fillets and roast in a pre-heated oven for four/five minutes only. The lamb is very lean and won’t take much cooking. Cook it pink so about 46-50ºC on a temperature probe.

Roll the lamb fillets in the crumb so that they are totally coated and allow to rest for four/five minutes. Now slice into four coated lamb steaks.

Serve with some beetroot roasted in the oven and the pickle on the plate (see photo).