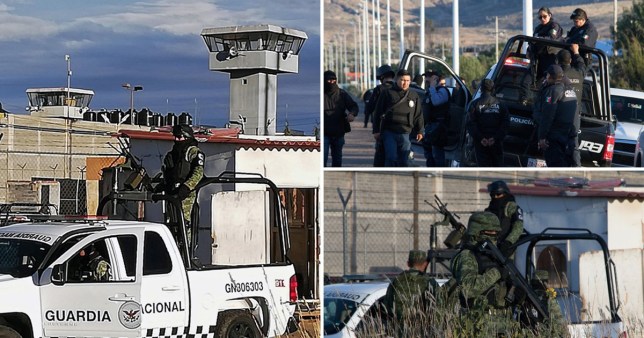 Sixteen inmates have been killed and five others wounded in a mass fight after a prison football match. The New Year’s Eve game involved rival drug cartel members and descended into a bloodbath involving guns and knives at the prison in Mexico.

It looks like it was just a diversion as local media reported there was also a foiled escape bid during two hours of violence and it took a riot squad to restore order. The fight broke out at the Varonil prison in the town of Cieneguillas, located in Mexico’s north-central Zacatecas state.

Members of the rival Gulf and Los Zetas cartels were reportedly playing in the football match as an end-of-year treat watched by family members including children. It is thought visitors to the jail brought in guns and knives as the jail was declared free from weapons at the weekend. However, after the fight on Tuesday one inmate was arrested with a firearm, three more guns were found in the prison as well as 20 knives, a bone saw, two hammers and scissors.

Some 15 people died of their injuries at the jail while a 16th died after being rushed to hospital. Five people are still in a stable condition in hospital after the fight, which is one of the worst outbreaks of violence in the country’s penal system.

After the bloodshed around 120 inmates were moved to another jail to prevent more violence. Mexico’s Public Security Minister Ismael Camberos said all prison staff working during the fight and on the previous shift would be investigated.

The jail is three decades old and Mr Camberos said security would be ramped up and the jail modernised to cope with the current security problems. The jail holds members of five main criminal groups, including the Los Zetas cartel which was formed about nine years ago when its founders broke away from the Gulf crime syndicate and set up a rival faction.

It took riot squad members two hours to get the fight under control, no-one has mentioned if anything happened to the referee!