Revenge is VEET! A Furious woman gets revenge on cheating boyfriend by replacing his shower gel with hair removal cream and bleaching messages into his clothes 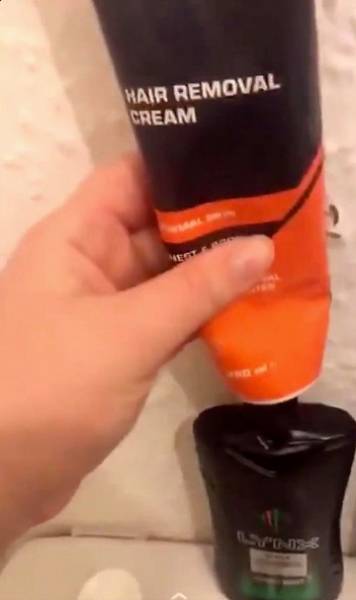 Revenge is VEET, dont try this at home! image : twitter

THEY say hell hath no fury like a woman scorned – and this is certainly true of one woman who was cheated on by her boyfriend.

Twitter user Kianna uploaded a video showing all the ways her sister Becca got revenge on her love rat partner after he strayed. The caption said: “Sisters boyfriend cheated on her after having been together over a year and meeting her kids, her Snapchat has me in a kink.”

The first way Becca got revenge was by wiping his toothbrush in the toilet…to give a TANGY taste no doubt!

Next she pours away his favourite Lynx shower gel and adds Veet hair removal cream inside the empty bottle…well BALD is sexy apparently!

Taking “one of his most prized possession” – a top from Stone Island – she snips through the garment using a pair of scissors…OUCH!

And she doesn’t stop there. Becca then adds bleach to a mug before using it to paint the letters on a top “I am….” followed by a large penis…Showing her ARTISTIC side, nice!

She also snips holes in his boxers and decides to leave him a sticky present in his trainers…You know sometimes, you get an itch and you don’t know what it is? Well…

Becca films herself melting chocolate in a mug in the microwave, before smearing it inside the shoes…mmm I actually don’t mind that one!

In another pair, the scorned girlfriend adds yogurt for him to find…Lame!

Getting creative, she also adds chili powder to other shower products and then wipes what appears to be a toilet brush on his football shirt…Na, the removal cream was better!

Since posting to Twitter, Kianna’s video has racked up over 5.1million views from people who are incredulous at Becca’s antics.

One person joked: “She seems to have taken it really well.”

Another added: “So she’s cheated on AND is gonna have a law suit. 2020 starting strong for her.”

And one wrote: “Forget the cost….get a restraining order, this girl has issues.”

It wasnt just me that thought this was a funny story as it achieved 5.1 MILLION hits on twitter!

Has anything like this ever happened to you or a friend? Let me know, you never know…