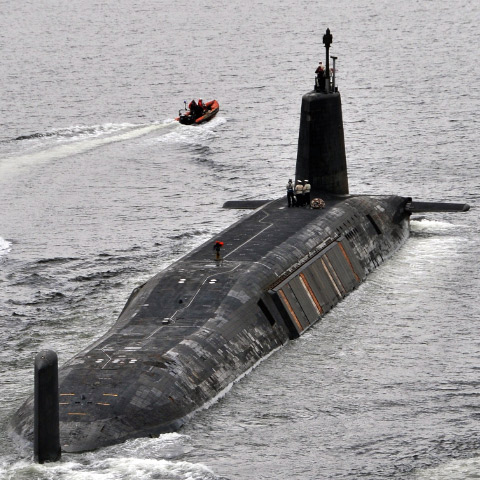 Ready to Strike: Britains Uk Sub is in position in the Persian Gulf.

A ROYAL Navy nuclear-powered submarine armed with Tomahawk cruise missiles is ready strike Iran should tensions give way to war in the Middle East. Despite desperate attempts to de-escalate the stand-off between the US and Iran, Top Brass are working furiously to ensure Britain is ready to back America militarily if asked.

Elite operatives from the SAS and SBS were also heading to Iraq braced for rescue missions, it was reported last night. The Royal navy has sent a number of Warships and destroyers to the Gulf but for operational reasons exact details are sketchy.

The death of Iranian military commander Qasem Soleimani in a US drone strike on Thursday has sparked fears of a third Gulf War.

In the capital Tehran yesterday, Iran’s president issued a chilling warning that the US made a “grave mistake” and warned it will face consequences for years to come.

Soleimani was wiped out after intelligence was received that his forces were about to launch kidnap raids on American citizens and ­diplomats  in the Middle East.

While the world held its breath for Iran’s next move,  senior defence sources revealed that an Astute class hunter-killer sub was sat silently in range of Iranian targets.

UK’S DEADLY MISSILES ARE ALREADY IN RANGE OF IRAN

An insider said: “There will be no first strike, but every precaution is being made, depending on how Iran reacts to the death of Soleimani.

“If things unravel quickly, the UK will always stand shoulder-to-shoulder with the US. The hunter-killers are the most advanced submarines in the Royal Navy. They are a deadly asset and there is one well within range of Iran.”

The Navy keeps an attack sub in the region at all times. The crew would just need to manoeuvre into a “firing pocket” and unleash the missiles. The 20ft  Tomahawk missile carries a 1,000lb high-explosive warhead with the power to destroy a building.  It has a range of more than 1,550 miles, travels at more than 550mph and has a  GPS guidance system allowing it to switch targets mid-flight.

Tomahawk land-attack cruise missiles were last fired by the  Navy in 2011 against  Gaddafi’s military facilities in Libya , they were used by the Navy in Iraq in 2003 and Afghanistan in 2001.