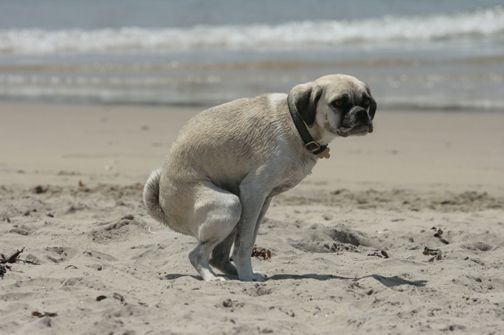 Spain’s beaches are supposed to be the pride of the nation as tourism is vital to Spain’s economy but complaints of dog poo on the golden sands are at record levels.

Spain still has a large issue in general with dog poo not being pooped and scooped off the pavements of Spain but as at present dogs are allowed on the beaches and they are coming under attack as owners don’t clean up their pets mess.

Due to the rising levels of dog mess on the beaches Town halls across the coasts of Spain could consider totally banning dogs from all beaches, that will ruin it for responsible dog owners who enjoy a stroll on the beach with their dog. A close source from the Town hall in Fuengirola told the Euro Weekly News that it’s becoming a very large consideration between Mayors and Town halls to enforce a total ban 12 months a year.

Our source also stated that the costs of clearing up are exceeding Town hall budgets, as well as a record amount of incoming complaints.

We the Euro Weekly News sent a reporter out this morning to inspect the beach along the coast of Fuengirola and take views from people who on this holiday day are enjoying what are supposed to be golden sands not a dog toilet.

Within 15 minutes of walking the beach our reporter counted 46 lumps of dog poo lying on the sands within a sector of just 2.6 miles between Los Boliches and Fuengirola.

” It’s disgusting” said Emilia from Finland as she looked at our reporter counting lumps of dogs mess – ” What is wrong with people? it takes what 20 seconds to pull out a bag and collect it up, these people are ruining it for others through sheer laziness and lack of responsibility” she further shouted angrily.

As our reporter only got a further fews steps up the beach he came across Mikel Harrisopp from Denmark who said ” Just look at it, it’s bloody everywhere, I know beach workers are probably on national holiday today but there really is no need for this, I come to Spain in the winter for the warm weather and lovely beach walks every morning but this year all I have come across is mounds of dog mess littered across the beach, it has to stop”

Then as our reporter reached near the Hole in the wall bar Debbie Denman shouted out ” You watch this dog, he’s called Dino – he’s owned by that Spanish man over there on the bench, he’s never on a lead, look he he comes!”

With that Dino walked across the board walk entrance onto the sand and crouched unleashing a huge pile of poo to the sand, whilst the owner looked oblivious, our reporter approached him and enquired if he was going to pick it up, he said in broken English ” oh sorry I didn’t see him do it ”

” Well, get your poo bags out then I’ve shown you now what your dog has done” said our reporter,  ” I don’t have any on me but don’t worry it will wash away with the tide” was the dog owners reply.

Debbie came storming over shouting at the man, who simply pretended he didn’t understand and walked off leaving the dog to follow yards behind, in fairness Debbie retrieved a recyclable dog poo bag and removed the mess.

She said ” Why on earth I am picking up his mess beggars belief but I can’t stand by and allow a child to step in that or worse, that dog owner does this all the time, I’ve seen it often, it’s totally unacceptable”.

When we returned our findings this morning with our Town Hall source and informing of the amount of dog poo found in just a small stretch along the beach he said ” I’m not surprised  at all, like I say complaints are at record levels – I see a total 12 months a year dog ban on beaches coming soon”

Miguel Ramos of Fuengirola said as our reporter was dropping 46 bags of dog poo into the rubbish bin ( yes he collected it all up) – I’ve been up the Town Hall and complained may times both here and in La Cala, on most occasions they have told me they are considering a total ban, I think the ban should be implemented immediately” he said