TENSIONS RISE IN MIDDLE EAST CRISIS: US deploys 6 Deadly B-52 bombers to Diego Garcia Military Base 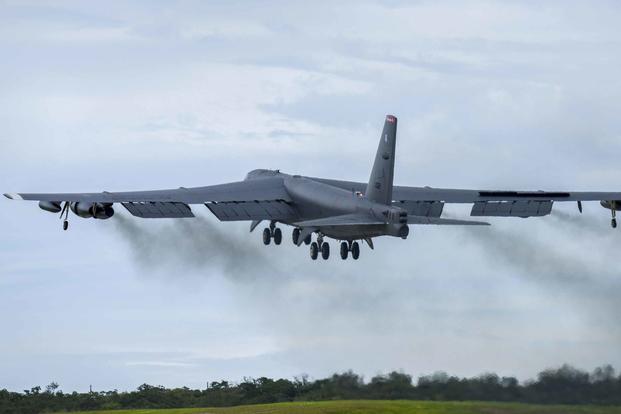 USAF B52 Strategic Bomber-This monstrous plane can carry a payload of up to 70,000 pounds, including up to 20 air-launched cruise missiles

The U.S. Air Force has despatched six B-52 Stratofortress bombers to Diego Garcia, a military hub that acts as a strategic location for operations in both the Middle East and the Pacific.

U.S. officials stated that the Cold War-era bomber will be “available for operations against Iran if ordered.”

“For operational security, we are not discussing forces flowing into or out of the U.S. Central Command area of responsibility at this time,” Pentagon spokeswoman Cmdr. Rebecca Rebarich told Military.com in response to a request for comment.

Diego Garcia — like Andersen Air Force Base, Guam, and Al Udeid Air Force Base, Qatar — has the ability to house B-52s with flight lines and airfields that can accommodate the aircraft’s size.

B-52s frequently deploy to those bases for continuous bomber presence missions, or to act as a reassuring overwatch and sit alert in case of conflict. B-52s were also routinely launched from Diego Garcia to conduct missions in Afghanistan following 9/11.

Rocket attacks on Saturday hit Baghdad’s “Green Zone,” which houses the U.S. Embassy; another rocket attack hit Balad Air Base where U.S. troops are stationed, according to Iraq’s military and state media. No U.S. injuries were reported.

Soleimani was killed at Baghdad’s International Airport last week in what U.S. officials called a “decisive defensive action” to protect American personnel and diplomats in the Middle East. He has been charged by the U.S. as the mastermind behind attacks that killed hundreds of U.S. troops since the 2003 invasion of Iraq.

While the latest deployment may act as extra support, it’s not the first time the Defense Department has sent a B-52 bomber task force to the region in recent months as a response to Iran. Four long range, heavy bombers from the 20th Bomb Squadron, out of Barksdale Air Force Base, Louisiana, arrived at Al Udeid Air Base, Qatar, on May 8, 2019.

The bombers conducted patrols over the Perisan Gulf alongside F-15 Eagles and F-35A Joint Strike Fighters for weeks before more firepower was added to the region in subsequent months.

Once the amphibious assault ship Bataan, which is moving toward the Middle East, arrives, the U.S. will have added roughly 10,000 personnel to the area within the last week.