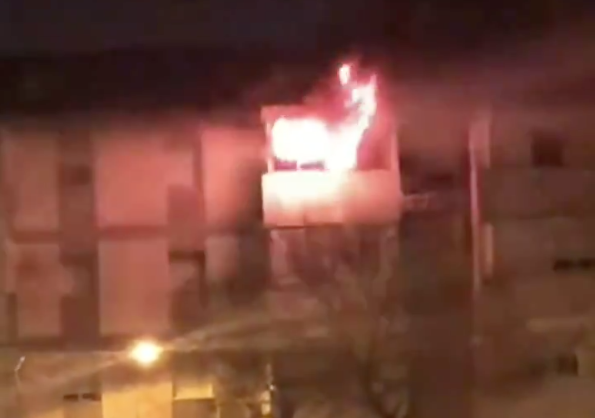 A devastating fire ripped through an apartment in Huelva, Spain, claiming the lives of two people. Credit: Twitter.

FOOTAGE of a devastating fire in Spain has been shared on social media, showing the extent of the blaze which ripped through an apartment building.

The horrifying fire which took place on Calle Salvador Rueda in Huelva ravaged a fourth floor apartment yesterday (January 7), claiming the lives of a 15-year-old boy and a 24-year-old woman. An additional 11 people were also injured in varying degrees, in an incident which has sent shockwaves through the local community.

The blaze began in the early hours of the morning, which saw several units of the police, fire brigades and ambulances rushing to the scene as dozens of calls were made to the 112 emergency services hotline to report that multiple people were trapped inside and desperately screaming for help.

Witnesses described seeing thick plumes of black smoke billowing into the air, where the destruction of the fire was so severe that debris flew into the sky landing on the streets below.

Firefighters bravely battled the blaze, rescuing 11 people who were inside the apartment block. Out of those individuals, 9 were seriously injured and transferred to hospital for urgent medical treatment. As well as many suffering from severe smoke inhalation, a 2-week-old baby was seriously injured and is now fighting for their life in the ICU of Juan Ramón Jiménez hospital.

As Euro Weekly News understands, the identity of the victims is yet to be revealed but local sources indicate that they were siblings, and the baby who has been critically injured is the child of the 24-year-old deceased woman. The family had lived in the apartment where the blaze.

An investigation has now been launched by specialised police officers alongside the fire brigade to determine the exact cause of this tragic incident, however it is strongly suspected that a brazier in the dining room may have been the origin.

The deadly blaze has spread heartbreak amongst the Heulva community, with the Council declaring three days of official mourning in the city, where Spanish flags will also be flown at half-mast on the Town Hall. The Council have also offered support to all those affected by the fire including psychological assistance and help from the social services to those who are unable to return home to the apartment block.

Francisco Javier Álvarez, the Fire Sergeant of the Firefighting Service of the City of Huelva, has also spoken to local reporters expressing his deep sadness on the tragedy. He stressed that the Fire Brigade did “everything possible”, working in collaboration with the Local and National Police as well paramedics on the scene.