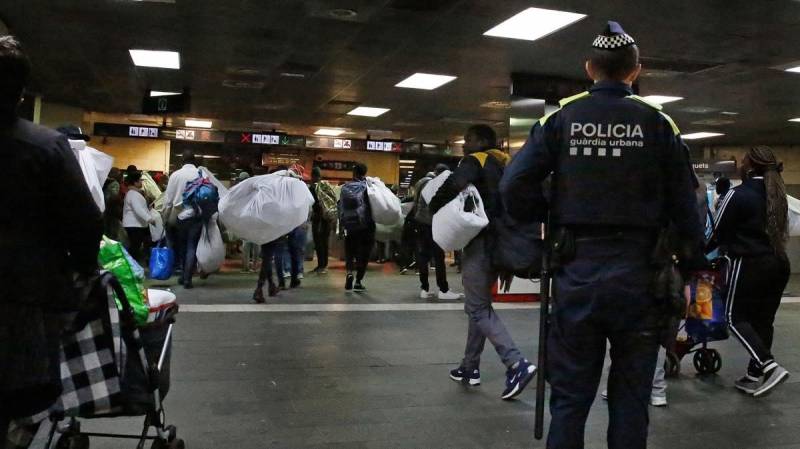 Witnesses report that the incident in Barcelona, Spain was 'horrendous' Credit: LV.

A SERIOUS altercation between the police and a group of street vendors, commonly referred to as ‘looky looky men’ has taken place in Barcelona, Spain – an act of violence which has been condemned by the Chief General of Barcelona’s Police.

The incident took place on the platform of Plaza Catalunya, a popular station for city commuters which is also used as a place for some 70 vendors otherwise known in Spain as ‘manteros’ to sell their goods. Twenty officers from Barcelona’s Urban Guard had descended to the station at 6pm yesterday evening (January 8), where they had planned to remove all those selling inside.

The eviction was due to the City Council receiving a handful of complaints by residents who expressed their contempt at the daily presence of the men. In addition, Barcelona City Council had made an agreement with Renfe last year to ensure measures were carried out to keep the station clear of street vendors.

As officers arrived at the station and made their intentions clear that they would be moving all the manteros, the men ran off with their bags and descended out onto the tracks. Requesting immediate backup, an immediate announcement was made at the station for all members of the public to leave immediately and trains were also ordered to stop.

Chasing the men down the track, police report ‘having stones thrown at them’, however due to the great danger posed, officers were told to stand down. A resident who witnessed the incident expressed his disdain that the looky looky men were targeted, where some had been struck by officers. He said: “They stay at the station because they know if they are caught by the police they have a quick escape on the tracks.” He added: “They cause no harm, they are just trying to make a living in a very difficult circumstance. They did not deserve this violence.”

One of the men who was involved in the eviction also came forward to give his account, a 25-year-old man originally from Senegal named Touré who arrived in Barcelona eight months ago. He said: “If they take away all the bags I have here, I suddenly lose 500 euros. I would prefer to work in construction, but I can’t without papers. None of us like to sell, but the government doesn’t let us do anything else and I have to pay my rent and food every month.”

More light has been shed on the incident on social media by commuters who witnessed the attack. One user wrote on Twitter that: “The manteros have come under attack by the police. I can’t believe it there were not doing anything wrong. Access to the L1 subway is cordoned off by the police. It is horror.”

Another user said: “Right now the street vendors are being brutalised by the police, horrendous”. One other condemned the police’s actions, stating: “They shouldn’t leave, they cause no harm to anyone and they are not thieves.”

However, Manuel Garcia, the Secretary General of the Local Police has issued a statement that somewhat contradicts witnesses and the street vendors, where he describes the incident as “violent and brutal.” He said that stones were thrown at the officers and there has been considerable damage to the station.

As Euro Weekly News understands, the station was closed for some time after the incident and police state that no arrests have so far been made.